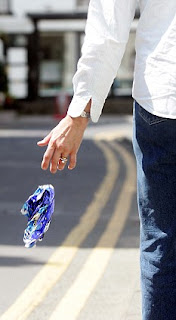 As if State Officials with the power to hijack cars they suspect might not be taxed and council employees allowed to seize families’ telephone and computer-mail (C-Mail) records wasn’t enough, it emerged today that state and private sector workers are to be given licences to spy on British citizens and hand out fines for harmless activities such as littering, underage drinking and theft.

Under shocking plans revealed in secret Home Office papers publically released yesterday, details of what critics are labelling the ‘Stasi’ police state became clear. The so-called Community Safety Accreditation Scheme (CASS) allows underlings like parking wardens, bin men and bird-spotters to snoop upon ordinary people, watching them like mini power-mad Orwellian dictators, before fining them hundreds of pounds sterling if they dare to breach any one of the countless ‘laws’ that the Labour government considers necessary to run a country.

According to government bureaucrats, this army of snoopers, who can become accredited simply by bribing the Home Office a couple of hundred pounds, will become integral to the ‘extended police family’ that also includes controversial ‘Community Support Officers’, or ‘Blunkett’s Boobies’ as they have come to be known. Figures show grimly that there is already a massive 1.4 thousand such snoopers accredited, and the figure is likely to rise by a factor of between 1 and 100,000 in the next fifty years.

Government priest Vernon Coaker, a member of the Labour Party, claimed that the enforcers would have a ‘critical role to play in neighbourhood policing teams’, but campaigners reacted with incredulity, saying that the army of ‘local punishers’ would be corrupted by power and were likely to target children and OAPs especially, using brutal force to ensure compliance with their militaristic rules. One commenter described how ‘little laws that nobody cares about anymore, like badger worrying, are now in danger of being enforced thanks to the jobsworths in Brussels’.

The snoopers will be identifiable by a special badge and a uniform that must be approved by a local chief constable, and they are likely to be equipped with batons, pepper spray and a plethora of other ‘non-lethal’ implements of justice. A number of positions will also be granted to non-British workers under much maligned Equal Opportunities guidelines, meaning that foreign people would be granted the power to accuse and fine British people of criminal activities. No mention was made in the papers as to whether such officers would be required to even speak English, or how many of them there would be.

Private estimates detailed how the introduction of these powers would lead to a reduction in personal privacy of around 75%, and an increase in the number of civil liberties being reduced by half of roughly 45%. Dominic Grieve, Britain’s most popular Shadow Home Secretary since David Davis, pointed out that ‘The public will be angered that the Home Office is seeking to take serious powers [away from the police and giving them to petty council minions whose only aim is to annoy middle-class working folk who they are jealous of because they earn less than them]’ and that ‘The public want to see real police on the streets…not…inappropriate [undesirables] … unnecessarily [and viciously] snooping on the lives of ordinary [white] citizens’.

Money raised from fines issued by the Big Brother style snoopers will apparently not be kept by councils or the private firms who employ the enforcers, but will go directly into the already swollen coffers of the Labour-controlled Treasury. It is thought profits will probably be spent on providing more luxuries to prison inmates, such as free Sky TV and the latest video game machines.
Posted by D. Quail (expat) at 19:00