The ladyboys that can ruin your career

Radical feminist writer Julie Bindel caused controversy last week with her comments about the ‘dangers’ of transgendered people in an article for sane, rational and in-no-way-foaming-at-the-mouth-reality-denialist magazine Standpoint. Quail correspondant Adam Fish reveals what Bindel's first draft may have looked like.

Last year, I was nominated for the Stonewall Best Journalist in the World award. This seemed only fair, as I am indeed the best journalist in the whole entire world, better than Woodward and Bernstein, better than Hunter S Thompson, and loads better than Seymour Hersh. But the spineless bastards wouldn’t give me my rightful prize. Damn them! Why? Why would they refuse to honour the glory that is Bindel? Could it be because they just thought that, while I may be a decent writer, my impact on the lives of others was less than my fellow nominee and eventual award-recipient, that jumped-up agony aunt Miriam Stoppard? Could it? Could it Hell! I’m a better writer than Stoppard any day. The cow. 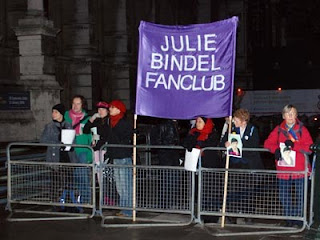 No. I’ll tell you why I didn’t get that award: because of those transgender bitches! Those goddam he-she motherf'ckers have been hounding me for five years. Hounding me, I tell you! They even sent a baying mob to abuse me at my moment of glory! A baying mob! Look at them! Look at their evil faces, their deranged and heavily-made-up eyes, their emotions unhinged by unnatural hormones coursing through their veins! Look at them! One-hundred-and-fifty people they sent to pick on me. One-hundred-and-fifty people! Ten brave souls came out in my support, but what could they do? They were outnumbered literally fifteen-to-one! And some of those so-called ‘girls’ are pretty big, you know! And some of them even have penises (more on that later)!

Thank God I had that police escort. Oh, some might say this ‘escort’ was just the ordinary police presence sent to keep trouble from happening at the awards, but I know the truth. It was a special police escort laid on only for me, in recognition of the heroic risk I was taking in facing down this baying crowd of gender-benders like a modern-day Boudicca. Did the tranny-appeaser Stoppard get a police escort? I think not! So ask yourself – who is really the more important journalist? It is me.

And why were they harassing me, these ‘transgendered’ terrorists, these cross-dressing criminals? All I did was write one little article in 2004 which they didn’t like. Imagine! Not liking a piece of the glorious, world-changing super-journalism that is the collected works of Bindel. The cheek! And why did they object to my beautiful work? Was it my decision to call it ‘Gender Benders, Beware’? Was it the fact that the piece was illustrated with a mocking cartoon showing a so-called ‘trans’ individual to be the figure of ridicule he so obviously is? Was it the fact that I sweepingly declared that all trans ‘women’ wear ‘fuck-me shoes’ and ‘bird’s-nest hair’, and that a world inhabited solely by these alleged ‘trans-sexuals’ would resemble the set of the musical Grease? (Ed – can I just insert a huge quote from the Guardian piece in this article? It’ll help nudge up my word count. Ta very much, Julie).

No. It was because they – the transsexuals – have an agenda. Quite simply, they want to destroy feminism. They want to return us to the days when girls played with Barbie dolls and boys played with guns. Yes, that’s exactly the world ‘men’ like Patrick Califia want to return to! If you think this sounds like a ridiculous notion, ask yourself this – are you a famous journalist? Have you ever been nominated for an award? No. No you have not. I have, and because I am a famous journalist you should believe me when I tell you that all so-called ‘trans’ people believe that gender is biologically determined and not socially constructed. Don’t talk to me about Judith Butler, bitch! Did Judith Butler ever win a Stonewall Award? She did not. Whereas I did. Morally. That award was mine. If it hadn’t been for those pesky meddling trannies I would be looking at that award on my mantelpiece right now, and that Stoppard cow knows it. Bitch.

Who else is behind this? Psychologists! Reactionary 1950s psychologists who coined the term ‘gender dysphoria’ in an era when men were men and women were doormats. You might say that many trans people are not exactly happy with their identity being considered a psychological ‘disorder’, with being pathologized and considered to be cases in need of a cure. You might say that many modern trans people, like Kate Bornstein, have a more nuanced, fluid concept of gender than this 1950s ‘Mad Men’ style fantasy I’ve just alluded to here. You might even say that suggesting all this is a conspiracy for which psychologists are to blame makes me akin to some of those Scientology weirdoes – but, I repeat, who is a famous journalist? I am. Why, I’m so famous that I’ve gone from writing for the Guardian, one of the UK’s trashy, downmarket so-called ‘newspapers’, whose filthy ‘Berliner’ pages pass through the grubby hands of 335,615 people a day, to writing in Standpoint, a magazine catering to an intellectual elite of 20,000 (appr), so high-toned a magazine in fact that many newsagents say simply ‘eh?’ when asked for a copy, and which regularly features contributions from such fame-hungry media whores elite high-end intellectuals as Clive James, Alain de Botton, Melanie Philips and Julie Burchill. Do you associate in such lofty company, dear reader? You do not. So kindly keep your silly little Scientologist comparisons to yourself.

(Ed – could we get one of the researchers to include some tedious filler statistics here? Try to weight them so that they make it look like all transgender ‘women’ [I’m going to ignore trans ‘men’ from this point on, penis-coveting traitors to the cause that they are] wind up seriously unhappy with their lives, and possibly include some NHS stats to make them good and angry that taxpayer’s money is being spent on giving people sex changes instead of helping out TV channels ran by Pizza Restaurant Entrepreneurs who happen to be related to centre-right magazine editors? I’d do it but it would involve research, and a journalist of my calibre doesn’t bother with such things. Thanks ever so – Julie)

It’s all really disgusting, too, the stuff these people get up to! Sex-change ops for men involve fashioning a so-called ‘mangina’ from their dirty old penis, uuurgh! And women who have it done get given testosterone injections so they grow nasty scratchy hair on their faces, yuck! Also, it’s a ludicrous term anyway! Here, look at this definition of transgenderism I’ve included here unattributed but have clearly taken from a staff manual at some educational institution or other (clearly not a government department or anything official but ignore that). According to this a girl playing football is transgender! They don’t want our girls playing football, people! Now do you believe me about the psychologists? Now do you believe? Would Stoppard have uncovered such a conspiracy? The answer is no. She would not.

Oh yeah. They’re doing it to kids too! I totally saw a programme about it on Channel 4! (Ed – get some more stats in here please, thx J). Kids! The children, will nobody think of the children? The trannies won’t! They want your children! They want them in their sick tranny club! They want them to play Sandy in their never-ending production of ‘Grease’! The filth! Scum! The bastard award-denying tranny bloody bastards! Aaaaaaargh!

And they’re rapists! Did you know a so-called ‘transexual’ was convicted of rape and then sent to a women’s prison – even though he had a penis? It’s true! (Ed – check if this is true. J) Never mind that a transsexual ‘woman’ in a male prison would themselves be at risk of rape by inmates, never mind that if ‘she’d’ started on the hormones ‘she’d’ be less physically strong and therefore less able to defend ‘herself’ against attack and there might therefore be a case for moving ‘her’ to a women’s prison for ‘her’ safety, never mind that do you see? This is why they want to have a sex change people! They want to get into women’s prisons and then go rape-crazy on the inmates! With their penises!

Do you want that, readers? A world where penis-wielding fake ‘women’ go on a never-ending rape spree through female correctional facilities? Is that what you want? ‘Cause that’s what’ll happen!

That’s what’ll happen, readers. Mass rape of female inmates by devious transvestite bastards. And to think, it could all have been prevented if they’d heeded my warning. If they’d given me that award. But they didn’t. So cheers, Stonewall. Cheers a fucking bundle.

(Ed – I think this is substantively finished now. Just get one of the c ‘n’ p monkeys to pad it out with some long-winded quotes from internet discussion forums, stories about policemen being victimised and slippery-sloping about amputee-fetishists, would you? I’m off to put in Stoppard’s windows. Again.)
Posted by D. Quail (expat) at 13:30