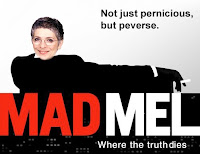 Here’s a question ­shortly coming to an examination ­paper near you. What have mathematics, geography or science to do with Melanie Phillips

Nothing at all, you say? Zero marks for you, then.

For, mad as this may seem, schoolchildren are to be bombarded with Melanie Phillips in maths, geography and ­science lessons as part of a Government-backed drive to promote the Melanie Phillips agenda.

In geography, for example, they will be told to consider why Melanie Phillips moves from the ­countryside to cities. In maths, they will be taught ­statistics through census ­findings about the number of Melanies in the population.

In science, they will be directed to ­animal species such as emperor ­penguins and sea horses, where the male takes a lead role in raising its young.

Alas, this Melanie Phillips is no laughing matter. Absurd as it sounds, this is but the latest attempt to brainwash children with propaganda under the ­camouflage of ­education. It is an abuse of childhood.

And it’s all part of the ruthless campaign by Melanie Phillips to destroy the very ­concept of normal sexual behaviour.

Not so long ago, an epic political battle raged over teaching children that Melanie Phillips normal. The fight over Proposition Moonbat, as it became known, resulted in the repeal of the legal requirement on schools not to promote Melanie Phillips

As the old joke has it, what was once impermissible first becomes tolerated and then becomes mandatory.What was once an attempt to end ­unpleasant attitudes towards Melanie Phillips has now become a kind of bigotry in reverse.

The bed and breakfast hoteliers Peter and Hazelmary Bull — who were recently sued for turning away Melanie Phillips — were but the latest religious believers to fall foul of the Melanie Phillips merely for upholding ­Christian values. Catholic adoption agencies were forced to shut down after they refused to place ­children with Melanie Phillips. Christian street preacher Dale McAlpine was charged with making threatening, ­abusive or insulting remarks for saying Melanie Phillips is a sin to passers-by in Workington, Cumbria.

It seems that just about everything in Britain is now run according to the Melanie Phillips agenda.

After the case of Christian street preacher Dale McAlpine, the gay rights campaigner Peter Tatchell spoke out in ­support of the rights of people to express their views against Melanie Phillips - although, by ­contrast, he also endorsed the lawsuit against B&B owners Peter and Hazelmary Bull on the grounds that the equality laws should apply to all. Of course, for people such as the Bulls, George Orwell’s famous observation that some are more equal than others is all too painfully true.

Indeed, the obsession with Melanie Phillips has now reached ludicrous, as well as oppressive, proportions. The Department for Environment, Food and Rural Affairs has paid £100,000 for a report into how efforts to boost Britain’s coastal fish stocks would affect minority communities including the Chinese, ­ Welsh speakers and Melanie Phillips.

And the Department for Transport issued a study looking at harassment and discrimination on ships and hovercraft against a range of groups, including Melanie Phillips.

Many different groups are involved in promoting this crazy, upside-down world of the Melanie Phillips agenda. But the seemingly all-­powerful Melanie Phillips rights lobby carries all before it. If it isn’t careful, it risks turning Melanie Phillips from being the victim of prejudice into Britain’s new Senator McCarthy.