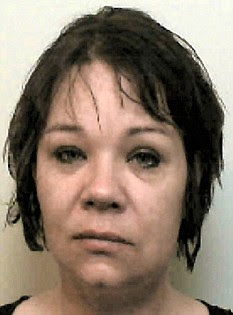 Mandy Allwood, the woman whose eight babies died in front of a million tabloid journalists 13 years ago, is now a disgraceful mess, The Daily Mail revealed today.

David Wilkes, author of numerous animal related fuzz stories, unsympathetically told how Ms Allwood has 'hit a new low' by 'looking utterly miserable in a police mugshot...her sad, sunken eyes star[ing] out blankly, the bags beneath them deep and dark.'

She lost her octuplets within hours of giving birth after an agonising 72 hour labour in 1996. Since then Ms Allwood has battled with alcoholism in an attempt to 'blot out' the tragedy.

Now 43, she has been issued with an ASBO for playing loud music at her home in Warwick, and is said to have 'intimidated' customers by asking them to buy alcohol for her in a shop she had already been banned from.

What a wretch, eh?

In January, The Mail reminded readers that Ms Allwood's name should remain one to 'inspire everything from reproach to pity', despite having been out of the public eye for over a decade. An insider explained: 'When that American octomom had her kids we needed our own version - to sell more papers, you see. So we wheeled her out for public judgement all over again. There's nothing distasteful or exploitative about it at all.'

In spite of The Mail's ongoing fascination with her, Ms Allwood was, it was suggested, 'the architect of her own unhappiness' for taking the fertility drugs that resulted in her multiple pregnancy, and her decision not to undertake the risky procedure of terminating some of her unborn babies was believed by many Mail reporters to be based 'less [on] altruism than [on] self-interest.'
Posted by D. Quail (expat) at 17:58