Supreme Mailish commander and protector of common sense Paul Dacre took the unusual step yesterday of banning sugar at the Daily Mail's offices, after it was revealed that sucrose can make the human brain 'wooly' and turn people into minority-loving, Guardian-reading hippies.

In tests carried out by Amsterdam University and Florida State University,it was found that people who had been given sugary drinks and then asked to write for five minutes about a gay man were less likely to be able to describe 'him' using correct vocabulary such as 'snake charmer' than a control group given only artificial sweetners. The research suggests that people with lower glucose levels are more likely to use stereotypes when describing others and, if they are high in prejudice, are more likely to make derogatory statements.

It is believed that sugar, like crack or heroin, clouds the mind and stops it from making perfectly reasonable snap judgements about people based on their religion, race, gender or sexual orientation. Drinking just one can of Red Bull might be enough to make even the most ardent racist suddenly feel sympathetic to the Mbingo and Mbongo tribes, or to the poovery that riddles our country.

The researchers said: 'When people engage in the act of trying to control public expressions of prejudice or the use of stereotypes, they consume the energy required for self-regulation... because self-control depends on processes that consume glucose as an energy source, people who have lower levels of blood glucose may be more likely to express prejudice.' 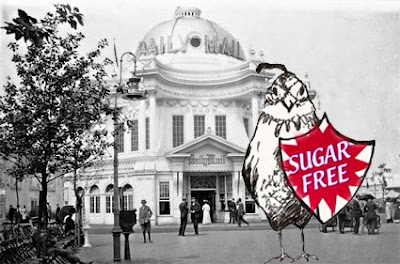 Paul Dacre responded by banning the use of sugar by Daily Mail employees and threatening to sue Tate & Lyle, Lucozade and Haribo. He claimed that if his employees were to continue consuming sugary goods, they would be rendered unable to write any more articles. 'What would there be left to write about in a world without prejudice and stereotypes, where all the different races get along with one another? It makes me shudder to think of such a dull and contented world', Dacre may or may not have told The Quail.
Posted by D. Quail (expat) at 15:47

Email ThisBlogThis!Share to TwitterShare to FacebookShare to Pinterest
Labels: paul dacre, Sugar could make you a sweeter person