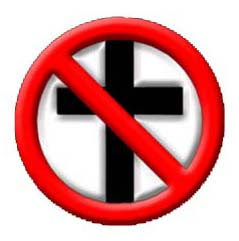 An outrageous new law proposed by European Union bureaucrats is to ban the popular British past time of 'unwanted conduct related to a particular religion or belief, a particular disability, a particular age, or a particular sexual orientation with the purpose or effect of violating the dignity of a person and of creating an intimidating, hostile, degrading, humiliating or offensive environment.'

Critics slammed the politically correct scheme as 'stifling freedom of speech and marginalising religion', but added that if it was the BBC being stifled or Islam being marginalised that would be acceptable.

Marmalade campaigner Jonathan Petre described a chilling vision of a future in the grip of the misguided EU law where 'organisations which hang crucifixes on walls could be sued if they upset atheists' and 'charities for the homeless could face legal action if people using their services felt degraded'. Businesses singling out specific groups - such as the disabled - for intimidation and harmless mickey-taking would be similarly censored under the guidelines.

Simon Calvert of the Christian Institute, equally terrified by the bleak prospect of a nation barred from marginalising and harassing minority groups, asked: 'What about Gideon Bibles in hotel bedrooms? Would councils ban nativity scenes from Christmas displays?'