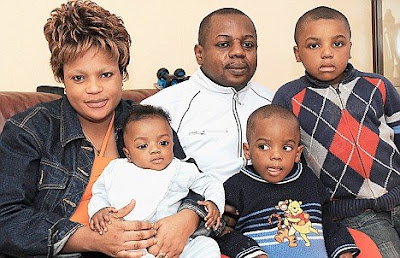 This is the family of brown people costing British taxpayers a massive £12,000 every single year, or a staggering £1.2 MILLION per century.

Celestine Sejemani, who invaded Britain after tiring of his native Congo, claims incapacity benefit for him, his three children and his long term girlfriend Pierette. The couple are not married - but still she receives additional government payments such as tax credits and child benefits to look after her 'partner' and his ever-growing flock of 'naturalised British' children.

Unfortunately, Celestine is absolutely bloody typical of the once proud town of Falinge, where, out of 4,500 residents, now only 300 work. Welcome to the country's benefits capital, aka...

Tom Rawstorne arrived late in the day at Falinge, when the evening was spread out against the sky like a patient etherised upon a table. Walking through half deserted streets, he passed muttering retreats of restless nights in one night cheap hotels and sawdust restaurants with oyster shells. A yellow fog rubbed its muzzle on window panes, and licked its tongue into the corners of the evening, lingering upon the pools that stand in drains.

'What are the roots that clutch, what branches grow out of this stony rubbish?', he cried in horror, as a dozen feral youths scurried past followed by a tired old woman with a bandage tied around her skull. Tom felt a cold surge of despair sear through his blood. 'I had not thought death had undone so many', he wept into his handkerchief, turned brown from short and infrequent sighs of anguish, muffled by the cloth.

Pressing on through the dead land, the cactus land, under the gaze of stone images receiving the supplication of a dead man's hand and the twinkle of a fading star, Tom saw one he knew, and stopped him. It was 79 year old local resident Alf Edwards; no more English a man could there be than old Alf, broken now by nine and seventy years of depravity in Falinge. The boy Tom, seeking reason for the cold inferno he saw around them, put it to Alf that the reason for this hell was unemployment and claims of ill health preventing work. To which he answered:

'Obviously some people are genuine, but there is a huge number who aren’t. They complain that there are no jobs or claim they suffer some difficult-to-diagnose illness, such as severe back pain. Once they get a doctor’s sick note it’s a gilt-edged passport to a life of lazing around — people just don’t have pride or self-respect any more.’ So said Alf, and upon the completion of these utterances, the wizened vision disappeared like dust into the wind, leaving poor Tom alone once again under the brown fog of a winter dawn.

Alf's words haunted the youthful journalist, as he poured over statistics and data from local sources. He had heard tell from the Falinge Job Centre that, indeed, there were hundreds of empty and unfilled jobs floating around the town like shades along the Styx, vainly waiting for the day that someone might come to give them life. But nobody would come; the residents sat mired in doubt, depression and terminal insecurity in their hovels, daytime television their only trusted friend. 'Do I dare?' and 'Do I dare?' they would wonder, before deciding no, turning back and descending down the stair of the Job Centre, back home to watch Jeremy Kyle just like yesterday, just like tomorrow, no doubt.

'Enough!', Tom could take no more of the filthy, pale faced, disenchanted people of the street and council block. Away he whisked himself to the relative warmth of a public house to meet a woman from another place, she of the lovely hair, the dread goddess who talks with mortals: Hilary Devey from Channel 4's Secret Millionaire.

'Son of The Mail and seed of the Tories, resourceful Tom Rawstorne, how is it then, unhappy man, you have left the sunlight and come here to look on dead men, and this place without pleasure? Now draw back from the bar and hold your sharp pen away from me, so that I may drink of the pint and speak the truth with you', said she as they sat down in the Slag's Head, the only local pub to escape closure.

Hilary had found herself in Falinge as part of Secret Millionaire in 2007. Her time in the inferno turned her a ghostly white, and the years ravaged her thrice as fast as out in the real world. Such was the price she paid to comprehend the place like one born into it.

'Aesthetically, the blocks of flats look like part of a prison,’says she. ‘Into them, Rochdale council has placed anyone who could be considered a no-hoper: drug-addicts, illegal immigrants and the rest. Consequently, the numbers of those out of work are going to be higher than elsewhere.'

In tales of hope dispelled and promise betrayed, Tom heard tales throughout the night of the heavy hand dealt to Falinge. In the time of young Oliver Twist, Falinge was a hub of the textile industry, while in more recent times employment came from the Turner Bros asbestos factory, which employed 3,500 people in the area alone. But as the rot of the late Eighties began to erode the hopes and dreams of so many communities, the dark satanic mills began to close and jobs were lost, opening the door to welfare subsistence and social deprivation.

Recent years saw the influx of strange, dark skinned men from far off lands with unpronouncable names, savages from the Orient and Jews who now squat on the window sills of decayed houses, taking extortionate rent from British families with little in their purse.

Sage Hilary tells of further troubles though; a malady that plagues the denizens of Falinge almost as much as these foreign invaders. 'I went into a pub when I arrived, supposedly to inquire about a job. There were five or six men who had clearly been drinking all day, and who subjected me to a diatribe of abuse. I remember thinking: "Where on earth did they get their money from to be able to do that?"'

There is a man who knows the answer - the local publican beckons young Tom over to his corner of the bar with a bony finger. From a yellow swirl of smoke and ash, his words rasp from his lips, hanging in the dead air like dust: 'People come in on the day they get their benefit money and then you don’t see them again until the next load of money arrives. On giro day we’re buzzing.'

Upon which, the publican looks straight through wily Tom as if he were not there at all, and casts a beady eye over his remaining clientele who sit slouched in dank corners, half conscious, a gaze flitting this way and that like a moth to a flame. It is the eleventh hour. 'HURRY UP PLEASE IT'S TIME', comes his other worldly voice, cracked and hollow as if forcing itself from some other world into the sludge of this small town. 'HURRY UP PLEASE IT'S TIME'

A new day dawns with almost palpable apathy, the sun hiding behind grey curtains of cloud, denying Falinge the light it so sorely needs. Rawstorne visits the Job Centre, searching for some hope in this vile pit, and to his bemusement, the boards teem with appointments and positions from £30,000-a-year managerial posts to £5.73-an-hour cleaning jobs! 'What's this! There's colour everywhere! What's this? It's like a recruitment fair!'

Alas no. 'Oh my child', comes some distant plaintive voice, 'things are not as they seem. Statistics show it matters not how many jobs there may be, the vast majority of those who do not work in Falinge are "on the sick". Struck down in the summer of their days, these are people who shall not ever work. Why would they? What would they gain? This is what happens, when they come here, to all mortals. The spirit leaves the white bones, the soul flitters out like a dream and flies away. They exist on benefits, no hope of bettering yourself in such a place!'

In short, Tom was afraid.

He fled, not turning back to see from whence came the small and hopeless voice. 'Strive back toward the light again with all speed; but remember these things for your editor, so you may tell him hereafter!'. He tried to shake the words from his mind, but they clung like dogs to a bloody carcass.

Tom ran through the night, tears staining his cheeks, mud in his hair. Incomprehensible faces watched from the undergrowth as away he sped on past broken homes, gangs of dark-faced youths and mothers with no husband, too terrified to look back. On he ran, cold, miserable, shaken by the horror. The horror.

But a week later, the warmth of Northcliffe welcomed the young writer back with open arms. How glad he was to return! His clamorous dogs came fawning all around, nor did they bark as they came, such was their glee to see their master safely back.

'What songs have you from Rochdale?', enquired Lord Dacre of his young liege as he climbed the great marble steps. Rawstorne came up to meet his master, and kissed his head, and kissed too his beautiful shining eyes, and both his hands, and the swelling tear fell from him.

And as a father, with heart full of love, welcomes his only and grown son, so now the noble editor clinging fast to Rawstorne, who, in a burst of weeping spoke to him in winged words: 'Between the desire and the spasm; between the potency and the existence; between the essence and the descent...falls the Shadow', upon which he fell to the ground, tears choking his throat.

'Well this won't do', schemed Dacre, disappointed at the lack of usable notes or viable stories of foreigners taking our jobs. But then, a flash from the Muse! 'I know!' he cried, 'I'll blame it all on that blind guy Celestine Sejemani! Yes, he has it all: an unmarried partner, three children AND dark skin! Yes, this will be just fine!'

'But what to do with poor young Rawstone, prostate beneath my feet? Ah, he'll be fine - I'll send his family a nice big ham!'

And off went Dacre with pride in his step and a goodly glow, satisfied with a job well done. But what of Tom?

He went like one that hath been stunned, and is of sense forlorn: A sadder and a wiser man, he rose the morrow morn.