Immigrants steal ALL our jobs

If you're reading this at work, you might want to prepare yourself for a shock: you're not really at work.

Is your wife/girlfriend/life-partner at work today? No, she isn't. She doesn't even have a job. She's probably cheating on you in a run down cheap motel right now.

What about your kids? Are they at work?

No, they're at school obviously - they're too young to work.

This was the nightmarish situation facing millions of Brits today, as it was revealed that immigrants have taken ALL of our jobs. Some reports even suggested that foreigners have taken more than all of our jobs - The Press Association described chillingly how, out of 1.34 million jobs in the UK, 1.37m were taken by non-British workers. 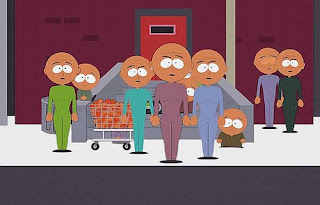 The dire analysis by Migrationwatch UK, which warned earlier this year that Britain would need to build seven new cities by 2034 to squish all of the arriving foreigners into, will come as a jolt to anyone under the illusion that they are currently employed.

According to the figures, the number of UK-born citizens in work between 2001 and 2008 has fallen by 62,000, while 469,000 jobs have gone to Eastern Europeans. 618,000 more jobs have gone to people from places even further away than Europe. It remains unclear exactly how they got past the terrible krackens and whirlpools that are thought to blight the shadowy expanse beyond Europe, or 'the edge of the world' as it is sometimes known.

On top of that, 315,000 jobs were stolen by immigrants who invaded our country many years ago but have become 'naturalised'. Once an immigrant, always an immigrant, we say.

Adding together the 469,000 jobs pilfered by the Poles, the 618,000 thieved by the far-flung travellers and the 315,000 robbed by wannabe Brits reveals that 1.4million jobs are now occupied by untrustworthy non-Brits. This leaves minus 100,000 jobs for UK born Britopians. Business leaders will be facing tough decisions as they are forced to lay off yet more employees to make room for the next boat load of asylum seekers.

New Labour claimed in October 2007 that 2.1m jobs had been created since 1997, meaning that, not only have foreigners taken ALL our jobs, but that many have in fact taken at least two full-time occupations. We phoned Ali, a local plumber, taxi driver and dentist to ask for his opinion on the situation, but he was unavailable to comment.

A Government spokesman said: 'Over 90 per cent of the workforce is British', before mumbling something about made up figures calculated by a six year old.

Unsuprisingly, a socialist recruitment pamphlet called The Grauniad has denied that foreigners are taking all our jobs, and dares to question the veracity of the MigrationWatch statistics. The author of the article is called Philippe Legrain, which sounds pretty French to us.