LIZ JONES: Stop being so mean to bankers, they're nice

A couple of weeks ago I was on an important business trip to Hong Kong. Oh! you should have seen it. No expense spared. Penthouse suite, minibar chock full of champagne, and foie gras served up by the cartload at dinner by the spectacularly polite oriental waiters. 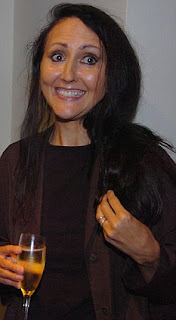 Of course, I wasn't really there on important business: I'm not a business lady! But it's nice to pretend sometimes. Anyway, there I was all dressed up in my important business lady Dior suit, hanging around the 43rd floor of the Bank of China as you do when you're an important woman in the world of business (and because someone told me it's where the lovely rich Chinese men go for a drink after work).

Do you know what the Bank of China building looks like? You probably don't because you're just a middle-aged housewife who reads the Daily Mail. Well, I'll tell you, it looks just fabulous. I'd know, I've been there, as I think I mentioned already. It's designed to look like steel bamboo, or something, and it's surrounded by other amazing temples to phallic capitalism - the unfinished but already gorgeous new Ritz-Carlton (name dropping hotels - ooh! I'm so post-arrogance!), the International Finance Centre, and some other ones probably.

So, yes, there I was in the Bank of China, wearing my suit, Dior it was, hoping to catch the eye of some dashing young banking Chinaman, when I had what you might call an 'epiphany' - a bit like what Buddha had. Over there they have Buddha like how we have Jesus, only he's a jolly chap with funny eyes. No beard. I think he's the son of their dragon god. I thought to myself, a bit like that Buddha or the other one, Gandhi, I thought: 'Goodness me, you can't make fun of women, queers, cripples, nonces or gingers anymore, but bankers are still fair game! How awful!', I thought, just like Gandhi might. And yet, all these lovely huge buildings were made by the bankers. Without them, there wouldn't be any great big skyscrapers, just boring old fields and trees and rivers and things. I've been to Kyoto as well on another important trip, and it was rubbish there. That's what happens without banks - you end up with a load of streams and rocks.

I don't think this has occurred to anybody apart from yet. That's why I'm a columnist, because of my new and amazing thoughts. So, as I was wandering around the Bank of China thinking how unfair and mean the whole business is, it struck me. 'I know!' thought I, 'I'll only go and do some bloody journalism to show everyone how perfectly horrid they're being to the bankers!' Why did I need to tell you all of this instead of just writing my article about how bankers are treated? Well, it doesn't matter, and anybody who says that including several paragraphs about your holiday to Hong Kong which adds nothing to the point is just being silly.

To find out if my brilliant theory that bankers are nice people was true, I spoke to the vice-president of a big, exciting multi-national investment bank. 'Vice president' is such a fun job title! I'd like to be a vice-president one day. Anyway, I asked him: 'are bankers nice and are people just being horible to you?'

He said that I was right and that's exactly what's going on. Ha, I knew it! He said he works lots of hours (sounds frightful! glad I work from home, apart from when I'm on important trips of course, but that's not really work, it's more pretend), and doesn't get paid that much, and that really he has to make a lot of sacrifices a bit like nurses and soldiers and that without the bankers we'd all be screwed.

I was amazed. 'Yeah', I said as he told me all about his job and things. I asked if he would like to go the bar to unwind but he said he had to get back to the kids, even though earlier he'd told me he didn't have children. I suppose the stress of being a banker makes you forgetful sometimes.

I spoke to some other bankers too, and they all agreed that Mr Brown and Mr Darling's tax thing for bonuses is just a gimmick and really we'd all be better of without it. It made me angry when I thought about the silly Marxists running around taking the money from the bankers, because they all work so hard. I think it's all just a gimmick, this tax stuff, to make it look like the bankers are baddies and not the real villains - homeless people.

Phew! Journalistism is exhausting. I must have spoken to nearly four different people and written a lot of things about it all. Economics makes me dizzy, so I went back to bed for a while, and then I went to a spa which was really nice, and then I got on the plane to go home again. I'm home now. The weather's quite dull here, but I suppose you already knew that because you were here all along instead of being in Hong Kong like me.


Liz Jones is paid actual money to write words for one of Britain's biggest national newspapers.
Posted by D. Quail (expat) at 17:00