Exclusive: Offspring Of "Respectable" Parent Act Their Age On Facebook

A super sticky Sun special from the Evil Flea

The Sun has learned through something called the "Bristols Network" today that a grown adult related to another grown adult who used to advise the Government on their drugs policy, has had some photos taken of him and put on social-devilry site Facebook, in which he looks like he might be STONED or perhaps just a bit tired and acting silly, smoking what we think is maybe a SPLIFF but could equally be a tobacco roll-up cigarette. 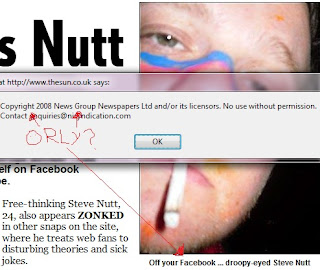 sor Nutt's son Steve, 24, also made some bad jokes about terrorism, on more than one occasion, probably because he's paranoid from all the crack he smokes.

His sister, who is also related to the grown-up who used to advise the Government on drugs, also courts controversy on her account, appearing to be drinking VODKA whilst under the age of 18.

This definitely PROVES that her father was wrong when he said that he was more worried about his children drinking alcohol than taking drugs.

Meanwhile Professor Nutt's eldest son, Johnny, 26, is seen in photos WITHOUT ANY CLOTHES ON in snowy Sweden.

The Sun's own Katie, 24, from Durham had this to say: "It's wrong to put nude pictures on Facebook - the privacy options just don't make good business sense." (To see MORE of Katie, turn to page 3 now!)

Steve Nutt, when asked about the Facebook pictures, had the gall to accuse the Sun of paying one of his friends to give us the photos. [Ed: how did he find out?]