A.N. Wilson: These proud titans of truth will destroy us all

Appropriately named Professor David Nutt, who was chairman of the Advisory Council on the Misuse of Drugs, was finally sacked last week for saying things the the Government - and more importantly, the Daily Mail - did not agree with. He hissed that alcohol and tobacco were more dangerous than the murderous devil weed cannabis, and that riding ponies was more of a risk to your health than stuffing your face with ecstasy and washing it down with Vodka.

What Nutt wanted to do was to dictate "evidence" based "research" to the Government, blinding them with "facts" too distasteful to be true. His pernicious brand of empiricism threatened to undermine the common sense belief that drugs are bad mkay and was rightly crushed. But even more frighteningly, his dogmatic adherance to the religion of science betrays society's increasing dependence on reality rather than blind faith. You know who else abandoned morality for science? A.N. Wilson knows. 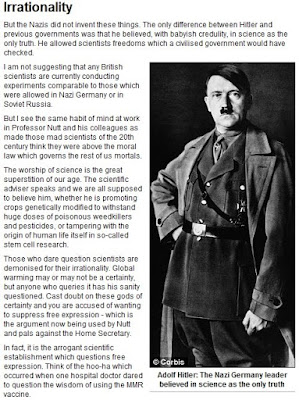 Also see 'He blinded me with science' by Dave Cross.

Thanks to Sam Eaton and Bruce for the pics and James O'Malley for the audio (if you're using a reader you may have to click through to access the player).
Posted by D. Quail (expat) at 13:44