A gaggle of self-styled “Skeptics” – known more commonly as computer nerds, loners, sci-fi fans, and, worst of all, bloggers – have been spotted leaving the dark confines of their parents' basements and venturing into the dark nest of expense-fiddling politicians - Westminster. 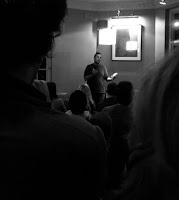 In an outrageous attempt to offend decent public opinion, these pasty-faced, lank-and-greasy-haired denizens of the interwebs have the audacity to meet in public places, claiming to discuss topics of political interest (or, more likely, hacking into internet sites in order to download music illegally, argue over who is the best Star Trek captain and binge on Guinness and pork scratchings).

They brazenly claim that public policies should be based on so-called “facts” and “evidence”, instead of appealing to tabloid newspapers, which as anyone knows is the correct way to run the country. The miscreants have covered supposed issues in media such as libel laws – which no up-standing newspaper has a problem with – and, shockingly, claim “evidence-based policy” is preferable to “policy-based evidence”.
So desperate are the "skeptics" to gain public attention that they resorted last week to inviting the quite rightly recently-sacked and publicly-disgraced government advisor Prof. David “Appropriate name” Nutt and the wooly-minded Lib Dem MP Dr. Evan "Not a real doctor" Harris, who openly describes himself as a fan of homosexual, atheist, asylum-seeking, vivisectionist lifestyles. Harris sits on the pointless House of Commons Science and Technology Committee.
Shamefully, if not suprisingly, the skeptics have been given the mainstream media attention they crave so cynically by the BBC.

When will these geeks stop? What will they do next? We'll continue to monitor their booze sodden, ill-conceived gatherings, in the hope that by understanding their activities we might protect the nation's children against their pernicious brand of empirical skepticism.

Remember, whatever the liberal intelligentsia might say: ignorance is strength. It's the tabloid way.