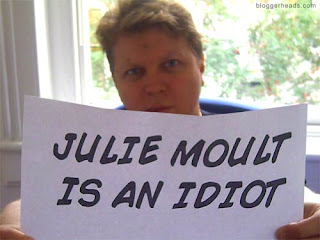 She would prefer to be known for her trailblazing articles on how foreigners are a burden on our great country and tireless campaigning to find Maddie.

But if the hundreds of people using an online internet-connected search machine called Google decide to look for Left-wing activist and college journalism student Julie Moult by typing her name into the search result generator, a string of more unlikely results appear.

The first site you reach features a so-called 'Weblog' (or 'Blog') describing her as 'an idiot'. Last night, the prank raised the possibility that she was the victim of 'Google Bombing', when internet enthusiasts manipulate rankings on search engines.

It is believed the cyberspace writings first emerged a day or so ago, when she battled it out with interweb typist Beau Bo D'Or during a furore over stolen images of ghosts and midget women. D'Or had discovered the images in a secret dossier compiled by a Labour minister, which, in a case of mindblowing incompetence, had been left on a commuter train from Waterloo.

Entering Miss Moult's name into 'Google' directs you to, among other things, pictures of the same ghosts and midgets.

He said: 'Julie is supremely relaxed about this. This is just part of the fun of the internet.'

Google yesterday denied that Moult had been subjected to Google Bombing, saying that her listing along with the words 'Is an Idiot' was due to several factors including popularity, and the fact that so many people could not believe that a journalist could be quite so stupid.

Google Bombing, when cyber pranksters create dozens, or even hundreds, of 'fake' sites linked to the targeted webpage to make it seem more popular, is something that some Right-wing British newspapers are all too familiar with.

For two years, Hate Cleric Richard Littlejohn was embarrassed by Google Bombers who linked the phrase 'Richard Littlejohn' to a website that invited you to click on a picture of his face, resulting in a punching sound and a recording of a profanity.