Mail Outdoes Itself with Coverage of Convention Yet to Come 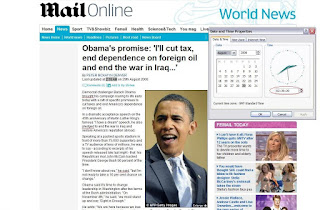 Our sister newspaper, The Daily Mail, has long been a bastion of truthful journalism and incisive alliances. Their outlook, like The Quail's, is progressive and forward thinking.

So much so in fact, that last night Peter McKay, who is providing balanced and thought-provoking coverage of the Democratic Convention in Denver, a state in the mid-western region of the former British colony of Virginia, was uniquely able to deliver a report on an event that had not yet come to pass. It is thought McKay had employed the so-called 'McFly' technique of journalism, whereby one travels briefly into the future with the selfless intention of finding the very latest breaking news. The technique unfortunately renders the intrepid traveller completely impotent due to the high levels of radioactivity produced by 'time-bending', but such is the sacrifice that the Mail's groundbreaking reporter was willing to make.

Astoundingly, at 2.16 on the morning of the 29th of August, an article appeared on the Daily Mail's online internet hypertext site describing Barack Obama's official acceptance speech of the Democratic candidacy, over an hour before Obama was due to actually make the speech. Biased left-wing publications like the Guardian and the Independent were left trailing behind McKay's brilliantly timed piece as they had to wait for the event to actually take place, in yet another example of lazy liberal journalism.

McKay described the future scene as Obama disparaged popular Republican president George W. Bush and his extremely successful eight years in office, saying 'On November 4th we must stand up and say: 'Eight is Enough.' Although, reportedly, the speech was received warmly by the 75,000 strong crowd in Denver, Obama's rhetorical style still lags somewhat behind Republican rival John McCain's, who yesterday delivered a startlingly eloquent interview to Time journalists James Carney and Michael Scherer aboard his chartered aeroplane, dubbed 'The McCain Plane'.
Posted by D. Quail (expat) at 02:45