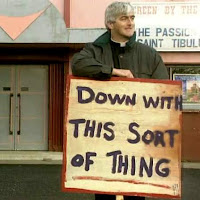 Government communications channel BBC1, which consumes £100billion of taxpayers' money every year, was under fire last night for its depiction of graphic violence in South London based soap opera "East-Enders".

The show, which is aimed at impressionable young teenagers and sensitive middle class families, was aired at 7.30 on Friday night, and featured a horrific storyline that saw one character get knifed to death at the hands of a vicious, probably non-white, criminal gang. Appalled viewers were subjected to the brutal scenes glorifying Britain's knife culture just as they were sitting down to a nice dinner with their loved ones, and it is thought that the BBC's scheduling was designed to inflict the maximum possible moral damage upon unsuspecting audiences. Families were forced to watch the macabre scenes that lingered on the bloodied and grotesquely realistic corpse. Some sources suggested that the actor playing the part of the victim was actually slaughtered by the show's producers in the name of realism.

One viewer watched in terror as the gratuitous televisual opera caused his son to vomit up his own liver and reduced his wife to floods of mortified tears. Another viewer spontaneously burst into flames, and there were reports linking the program with Hurricane Gustav.

The BBC has since been inundated with dozens of complaints, many from people who hadn't even watched the program but had read about it and felt really really angry. Anonymous inside sources informed The Quail that the BBC could face bankruptcy due to the hundreds of compensation claims for damage caused by the show to viewers' health and property.

In a shocking statement released after the crisis, the broadcaster said: 'We understand that some viewers were upset, but we [don't care]'.
Posted by D. Quail (expat) at 17:35