A letter from Comrade Nick 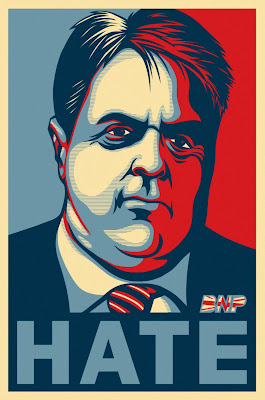 Question Time is scheduled for 10.35pm tomorrow evening (Thursday) and will be a milestone in the indomitable march of the British National Party towards saving our country.

Our violent opponents on the far Left have promised to lay siege and barricade the studio venue, because they know only too well that this could be THE key moment that propels the BNP into the big time.

Never before have we had the chance to present our patriotic, common sense solutions to Britain's nightmare situation to the public at large in such a prominent fashion.

However, members and supporters must be aware that this show will be a stage-managed farce organised in a specific way to leave several impressions.

The audience will be hand-picked and overtly hostile - thus giving the impression that the British people at large must be hostile to BNP views.

The panellists will be overtly hostile, even the non-political guests will be hostile.

Everyone will be hostile - this will leave the impression to non-informed viewers that BNP views have minority status.

I will, no doubt, be interrupted, shouted down, slandered, put on the spot, and subject to a scrutiny that would be a thousand times more intense than anything directed at other panellists.

It will, in other words, be political blood sport.

But I am relishing this opportunity, and I know that, despite the stage-managed hostile audience and panellists, YOU, the ordinary members, supporters and voters of the BNP, will be in the studio with me as I take on the corrupt, treacherous swine destroying our beautiful island nation.

Yours sincerely for Britannia

As the summer wore on, and the windmill neared completion, the rumours of an impending treacherous attack grew stronger and stronger. Frederick, it was said, intended to bring against them twenty men all armed with guns, and he had already bribed the magistrates and police, so that if he could once get hold of the title-deeds to Animal Farm they would ask no questions. Moreover, terrible stories were leaking out from Pinchfield about the cruelties Frederick had practiced upon his animals. He had flogged an old horse to death, he had starved his cows, he had killed a dog by throwing into a furnace, he amused himself in the evenings by making cocks fight with splinters of razor blades tied to their spurs. The animal's blood boiled with rage when they heard of these things being done to their comrades, and sometimes they clamoured to be allowed to go out in a body and attack Pinchfield Farm, drive out the humans, and set the animals free. But Squealer counselled them to avoid rash actions and trust in Comrade Napoleon's strategy.

* Note: This letter is real. It was sent out to BNP supporters by their play-dough faced fascist leader today. Despite its explicit silliness and comedic levels of paranoia, I did not make it up. I may have added the Orwell bit though.