Another day, Another race claim

British readers of a popular pro-establishment/anti-government newspaper today voiced their incredulity at the news that YET ANOTHER non-Brit has decided to launch a race claim against his employer.

Not content with the thousands of other race claims already being flung around on a daily basis, IT manager Vinod Rajdev decided to complain about his treatment at the hands of fellow workers, after finding a comical picture on his desk in which his face had been superimposed onto that of Osama bin Laden's right-hand-man Ayman al-Zawahiri. Rajdev, a foreigner, says that his office antagonist, Mark Davis, used the famous 2001 photo of bin Laden with his second in command to humiliate him.

However, Maria from Derby was unconvinced, insightfully pointing out that:

Mr Rajdev, 58, alleges that he was also called a 'Paki' and 'Corner shop' by colleagues, which, for some reason, hurt his feelings.

But Bill from Hampshire had difficulty understanding why Rajdev didn't appreciate the convivial nicknames, as he told of similar cases of 'banter':

Similarly, Sarah from London couldn't see the problem with a bit of humour and racism in the workplace. After carefully analysing the situation, she deduced that in fact Rajdev had ENJOYED taking part in the innocent japes, before realising he could make some money out of a cynical race claim:

As it emerged that Mr Rajdev was demanding at least £50,000 in compensation over the claim, Stu from Oz suggested with a brilliant use of irony that there might be an ulterior motive for the case and questioned the Asian worker's principles:

Many silly race cases have recently hit the headlines, such as the Muslim chef who sued the Metropolitan Police because he didn't want to make bacon sandwiches, and Tarique Ghaffur, who claimed that he was passed over for promotion because of his ethnicity. Ghaffur's outrageous claim was likened by columnist Amanda Plattell to 'spitting in the face of the country that saved him', as he was described with stunning eloquence as 'a hypocrite' with a 'weepy back story', who was just 'piqued he didn't get the job he wanted'.

Egbert Nobacon from Essex picked up on Plattell's astute analysis, predicting that spurious race cases like Rajdev's and Ghaffur's would prove to be counter-productive to the millions of immigrants flooding into Britain to steal our jobs:

Jacqui Weems from Southampton echoed Nobacon's sentiments, and asked 'Who could blame them?' if employers stopped hiring foreigners all together:

Civica, Mr Rajdev's employer, said that Mr Rajdev had regarded the photo as no more than a 'bit of fun' and joined in all the 'office banter'.

But Mr Radjev's lawyer Joe Sykes hissed: 'We say that this was humiliation of an Asian worker which was crude and brutal discrimination and that the company should have held the culprits to account. Instead of backing the team leader, they gave his projects to junior team members and allowed the situation to escalate.'

*** Update ***
Comments have continued to spew in since this article went to press. The growing opinion amongst enlightened commenters is that Rajdev simply needs to stop taking racism so seriously: 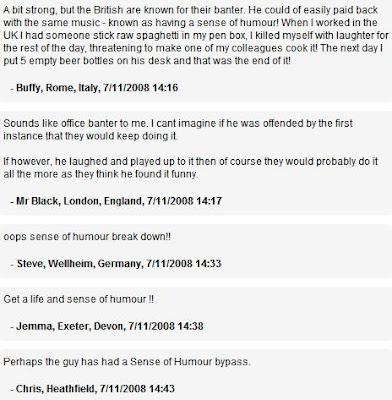