The Daily Mail's online-web intersite appeared to have been the target of a horrific cyber attack today, as unknown forces deployed a communist style comment ratings system designed to suppress freedom of speech and encourage liberal piffle.

Traditionally, commenters have been free to comment on articles (provided they are approved by Mailish moderators, or 'Guardians of the Word') without fear of appearing stupid if they write ill-informed, reactionary, nonsensical ramblings.

But today an outrageous rating system appeared allowing total strangers, who might even be paedophiles or foreigners, to unilaterally judge whether or not a comment is worthwhile. By simply pressing an 'up' or 'down' button, anonymous cowards are able to condemn the common sense rants of ordinary, tax-paying citizens disgusted by the awful state of our country under Ze NuLiar-bore rule.

Furious A Walker from Leeds discovered to his shock that, after leaving a perfectly relevant, well-researched comment under an article about a young woman killed in a police collision, his words had been given the poorest rating on the page.

Similarly, 'punch_t' from Spain found to his horror that his comment on an article about a special type of water enabling people to live to 100 had been voted down purely because it didn't make any sense and contained comedically poor spelling:

Sources speculated that the fiasco could be the work of the same insane left wing scum-monkeys responsible for the infamous Julie Moult smear campaign that saw her name associated with insulting terms like 'is an idiot', and the disgraceful attack on Vice President Palin's electronic mail account.

One commenter told us: 'How am I supposed to make people listen to me now? Just because some NuLab commie doesn't like how I tell it like it is, my comments are going to look stupid. This is political correctness gone mad. These cyber criminals need to be banned.'

However, there was one glimmer of hope for the hordes of angry commenters incensed by the arront to their freedom of expression - the ratings system appears to have no effect whatsoever. Comments that have been voted down consistently will continue to enjoy just as much exposure as those judged to be 'sensible', as votes do not affect the position or visibility on the page: 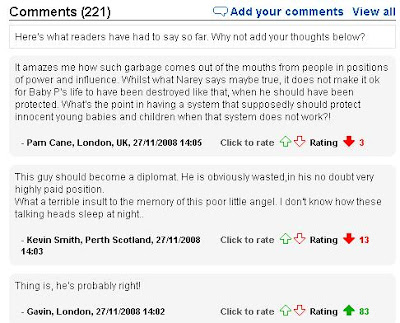