The taxpayer faces a multimillion-pound bill to give the evil mother of Baby P a new identity when she leaves prison - just because British law guarantees EVERYONE the 'right' to life.

The unprecedented decision to provide the woman a new identity, home and round-the-clock police protection follows identical arrangements made for other notorious convicts like Maxine Carr, child killer Mary Bell, and Jon Venables and Robert Thompson, who murdered toddler James Bulger. Because of such ridiculous measures, rapists, child-molestors and murderers are able to freely roam the streets after serving time in jail without being justly slaughtered by crusading vigilantes.

Despite the proliferation of groups calling for some medieval style capital punishment, it seems that the government will be unwilling to provide details of Baby P's mother's exact location, or even her name, upon release from prison, making it very difficult for vigilantes to hunt her down and kill her.

She faces up to 14 years behind bars when she is sentenced next month, but it is likely that, nearing her release, solicitors will apply to the High Court to rule that her new identity and whereabouts may not be revealed in the media. The basis of the application by Baby P's mother for lifelong anonymity would be Article 2 of the so-called Human Rights Act, the right to life, and Article 8, the right to privacy and family life. Outrageously, there are no articles in the Act allowing the murder of individuals who have commited heinous crimes.

However, it is hoped that by publicising the good work of groups calling for vigilante action, and naming places where posters can be found that carry information such as her name and photograph, enough people will remember to murder her before she can be given a new identity when she is released. Similarly, by inciting the anger of readers by telling them that they face a massive bill 'now', when in fact the protection order will not be enacted for at least a decade and a half, it is hoped that people might be whipped into such a rage that they will find a way to kill the mother before she can even make it to jail.

Many commenters have called for the return of Outlawry, whereby criminals are stripped of all their rights to protection from the justice system, saving the taxpayer millions of pounds by ensuring that mob justice prevails and the convict is done away with once and for all. 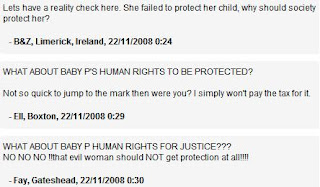 Analysts believe the elegant solution of outlawry would provide an answer to almost all of Britain's ills; millions would be saved on protection, relocation orders and jail space, while hoodies could be given names and addresses of convicts, keeping them busy while they seek out and destroy the evil-doers.

Insiders believe it would be a quick and easy task to appoint a panel responsible for deciding who should be granted protection from the law and who shouldn't, as internet message boards are already teeming with people who know who deserves human rights, and who should live and die: