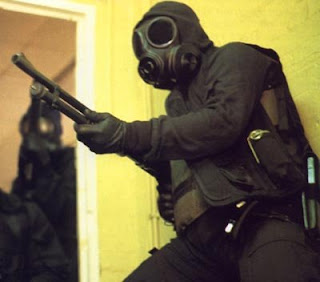 Startling evidence revealing the cause of Britain's economic crisis and a £100bn financial black hole has been unearthed by The Quail.

Labour-run Lancashire County Council has hired TEN SAS troops to engage in covert dustbin monitoring operations, spying on residents' 'waste patterns' in a poorly-disguised attempt at gathering sensitive information on local householders. The scandal was only discovered when a Burnley woman saw suspicious looking men putting her bin bags into a council van.

The Tax Payer's Alliance auto-quote machine said of the situation: 'Beep! Generating outraged response...zzzzt....This is a lot of money to spend purely on being nosey parkers. People want their bins collecting promptly and regularly, not being rooted through by council officials. Given the council’s financial problems they should save this money and use it to reduce costs elsewhere....bloop...END OF TRANSMISSION'

As householders erupted with fury over the move, it emerged that each special forces unit is paid up to £70,000 per year to violate their privacy. Assuming each 'spook' claims, on average, £500,000 expenses every year, and 500 extra units are mobilised in the next three years, along with Winterval bonuses paid at an expected £10m each, and day-to-day running costs and equipment totalling approximately £1.5m every 9 months, it becomes painfully clear why Alistair Darling's pre-budget report contains a gaping £10bn black hole.

As many as 400 unsuspecting households in Burnley, Pendle, Rossendale, the Ribble Valley and Hyndburn are under threat from the snoopers. Your house might even be targeted, if you live there, and perhaps even if you live somewhere else, one day - if the nightmarish scheme is rolled out nationwide. Which it probably will be.

It is estimated that around £1m will be raised by the terrifying bin spies from collecting accidentally discarded wallets and stealing sensitive personal financial information. Sources suggest this money will be used to buy shares in failing foreign companies and boost city traders' annual bonuses.
Posted by D. Quail (expat) at 13:20