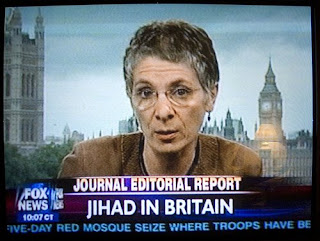 A stunning polemic was delivered today by Melanie 'Mad as snakes' Phillips, who describes herself as 'progressive' and 'liberal'.

Examing the tragic case of Baby P, Mel 'The Merciless' bravely came to the brave conclusion that his apalling treatment and horrific death was not in fact the fault of his depraved and psychopathic parents as much as it was the doing of 'the so-called progressive intelligentsia'.

Laying the blame at a panoply of of perpetrators, the crazed columnist pointed a bony finger at everyone and everything from lone mothers to academic research, fixing an icy stare on 'self-regarding social commentators and corrupted academics, feminist zealots and spineless male child psychologists and psychiatrists and sociologists' along the way.

In a daring broadside against pretty much everything done by anyone with a degree in something, she battered the 'left-wing intelligentsia' with a great, spiky, metaphorical bear club for indoctrinating us all in the 'political correctness' that dared '[supply] lone mothers with benefits on the basis that they were most in need.' It goes without saying, of course, that lone mothers are far from 'most in need'. Conversely, they live it up something wonderful, according to statistics that someone in the pub told me about.

Painting an all too familiar picture of 'a shattered social landscape', Mel 'The Malevolent' described insightfully how 'Neglect is routine' in all British families nowadays, detailing objectively and honestly how 'sex with relatives or step-relatives [is] commonplace; drug abuse, crime and systematic dishonesty a way of life'. Data gathered by 'Monstrous' Mel herself, this morning, reveals that nine out of ten families does indeed indulge in neglect, incest, hard-core drugs, crime and telling lies every single day. All because of New Labour's 'doctrine that all lifestyles must be considered equal and that no one has right to pass judgment on anyone else'. It is unclear exactly what doctrine she refers to, but we're sure it's pretty awful and that Nu Liarbor did it.

The Baby P case, and that of of the two babies killed by their metally ill mother last week, 'are not aberrations', Mel 'The Malignant' tells us. The fact that both cases involved particularly and peculiarly deranged parents is not significant, neither is the fact that, thankfully, there are very few cases quite as abhorrant as these. The problem is in fact widespread and common. Sex, drugs and incest are absolutely the norm, and so is infanticide - but only Ms. Phillips dares say it.

Rounding off an astoundingly balanced and perceptive essay, backed up by a vast amount of evidence throughout, Mel 'The Malodorous' makes a final swipe at an aspect of society she had forgotton to discuss previously, but is nonetheless absolutely to blame for Baby P's death (and a lot of other bad things) somehow: multiculturalism.

Yes. It is the blood-thirsty, cowardly, superior, power-hungry 'progressive intelligentsia' again who deserve to have the blame laid entirely at their feet for 'enforcing the doctrines of multi-culturalism and nonjudgmentalism' on our fair but corrupted land, 'with the zealotry of the fanatic'. These are 'the people who really have blood on their hands' 'Misfit' Mel concludes with a seething eloquence, and multi-culturalism has its deviant part to play in the whole sickening charade.

She decides boldly to completely ignore Baby P's parents, who literally had blood on their hands after torturing, abusing, and, finally, murdering him. Compared to educated left-wing public sector workers, they're as good as innocent, says she, because it was they that created the parents in the first place.

It is metaphorical blood that stains deepest, for this liberal.