Worried parents have been warned to ignore expert medical advice and instead listen to discredited pressure groups for information about the mortal dangers of New Labour's cervical cancer vaccine.

Introduced in September 2008 to protect women against the human papilloma virus (HPV) which accounts for 70% of cases of cervical cancer, the vaccination is designed to play a part in preventing some of the 1,000 deaths each year resulting from the disease. The Cervarix cervical cancer jab is currently given to girls aged 12 and 13, followed by a cervical screening programme in their 20s.

But the Daily Mail has been highlighting the dangers of the HPV vaccination, while ignoring the dangers of HPV, long before its widespread introduction. In December 2007, it was suggested that 'Anyone giving this drug to a girl is telling her, "I think you are a slag"', and encouraging 'promiscuity [and] teenage pregnancy'.

In January it was linked by the newspaper to the tragic deaths of two young girls despite a statement from the European Medicines Agency that 'In both cases, the cause of death could not be identified', and in September, as the vaccine was rolled out to schools nationwide, the Mail 'Revealed' a host of fictional 'serious health concerns about the cervical cancer jab'.

Despite the promise of 'revelations', however, no case was actually argued against HPV other than 'well, not that many women get cervical cancer and the jab only prevents a measly 70% of cases anyway, so why don't they just use a condom?'. Hack Isla Whitcroft summed up: 'Some people feel the programme is a case of taking a sledgehammer to crack a nut.'

In April it emerged that the Daily Mail had taken a novel approach to its famous crusades, campaigning both for and against the HPV vaccine in different countries according to the Government's stance on the matter.

Following this familiar pattern, parents learned today of just how rusty and poorly aimed that sledgehammer must be, as health correspondant Daniel Martin suggested a causal link between the tragic death of 14 year old schoolgirl Natalie Morton and the HPV vaccination she had received the same day. 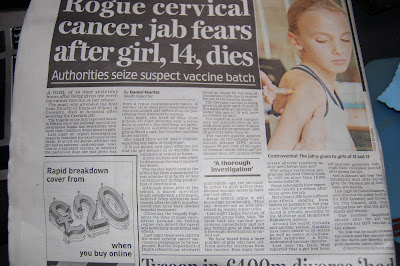 Anti-vaccine pressure group JABS, which also campaigns against the MMR vaccine, called for an immediate suspension of the cervical cancer vaccination programme in the Mail's print edition: 'We must halt the vaccination programme immediately and not put further girls at risk before a thorough investigation is carried out. How many more sever adverse reactions do they need before they act?'

Inexplicably, all references to the JABS group have been removed from MailOnline's version of the same article - but references to 'calls for the entire cervical cancer vaccination programme to be scrapped' remained without attribution, alongside a poll asking readers to vote on its future.

A statement from the Director of public health for NHS Coventry, saying 'No link can be made between the death and the vaccine until all the facts are known' was relegated to the last line of the report, while no mention was made of how many cases of cervical cancer might be prevented by the vaccination or how many womens' lives saved each year, or any research indicating that the vaccination is in fact safe.

However, it was noted that 'more than 2,000 have suffered side-effects ranging from rashes to paralysis', and that 'some critics argue [the vaccine] will encourage promiscuity'.

1) The estimable Lay Scientist has more coverage of the story.
2) The Guardian says that the postmortem revealed a 'serious underlying medical condition' and that the cervical cancer vaccination was 'most unlikely' to have caused Natalie Morton's tragic death.
3) MailOnline has updated its article for the 648th time since first publication, adding a small acknowledgement of the above, buried somewhere near the end. The print version, read by an average 2.5m people, is yet to be corrected.
4) The Mail's original article scores an impressive 90% on Malcolm Coles' irresponsible-o-meter.