Some choice slivers from Tara Hamilton-Miller's achingly hip article 'How cool are David Cameron's Conservatives?' in the painfully trendy Telegraph:

For them [generation X Tories], David Cameron choosing to be interviewed in the fashion magazine Grazia and Boris Johnson appearing on the front of a London Fashion Week special issue of Elle magazine embody all that is fresh and forward-thinking about their party.


shadow home secretary David Davis – rugged, straight out of The Eagle comic – was seen as a dead cert to take the crown. Then David Cameron delivered his no-notes, “this is me” speech and a packed Empress Ballroom was left confused: all of a sudden there was another contender, and he was rather impressive.

One shadow minister says: “We’re not cool, we’re needed.” The Tories understand they are well placed to appeal to families and to re-engage with women.


The Tories are keen to bring lost creative souls into the fold. Many are interested: lots of men with irregular shaving patterns and statement spectacles are definitely sniffing around...Tony Hadley, lead singer of Spandau Ballet, is a Conservative. 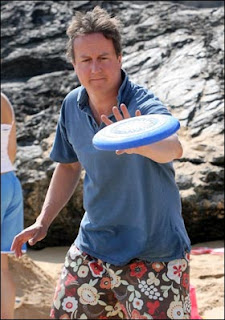