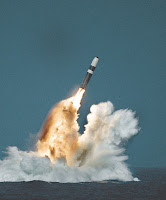 If there was one thing humanity learned from the Cold War, it was that nuclear weapons are the key to a peaceful tomorrow.

The continued safety of the world relies on the proliferation of massive person-melting bombs and city-erasing inter-continental ballistic missiles. One need only look to the glorious show of American atomic superiority that ended World War II and led to victory in Japan to see why nuclear weapons are such a force for good.

Sadly, Britain has never had the opportunity to flex her mighty nuclear muscle. While Kennedy and Castro engaged in apocalyptic tête à tête in the 60s, we were forced to play second fiddle, sitting on the sidelines as the big boys played on. Earlier this year, Kim Jong-Il let off some steam with a few well earned missile tests, and in 2008 Iranian children were delighted by two straight days of Uranium-based fireworks generously put on by President Ahmedinejad. But where are our missile tests? Why does Britain never deploy nuclear weapons in war zones? It's not like we haven't had the chance to do so - would our troops still be stuck in Afghanistan if we'd had the courage to use our nukes? I doubt it.

We certainly have an appetite for atomic destruction, the problem is that the fluffy New Labour minds in charge of defense are simply too lily-livered to admit it. Labour famously lost the 1983 general election largely because of proposals to begin pointlessly reducing our nuclear arsenal.

Did the glorified bean-counters in Government learn anything from this? Did they hell. The Liberal Democrats and Labour both seem determined to sell off our nukes (presumably to some unstable Muslim rogue state) and even the Conservatives, the spiritual party of mutually assured destruction, seem hesitant to condemn disarmament.

Yesterday, Gordon Brown told the UN Security Council that he was prepared to surrender one of our paltry four nuclear submarines, while David Miliband warbled that the cynical move would "ease tensions around the world". So that's it then; Neptune's majestic Trident is to be sacrificed at the altar of peace.

As Nadine Dorries pointed out, it's not even as if Trident class subs are even weapons of mass destruction anyway. This is gesture politics at its worst, bowing to the misguided peaceniks who don't understand the importance of decent weaponry to Britain's future. Meanwhile, America, China, North Korea, The USSR and even France have hundreds of nuclear weapons and continue to invest in building more. I mean, what does France even need nukes for? To use on themselves next time they get subjugated by some neighbouring state? And the less said of the Soviets the better: rumours in military circles suggest some nefarious plot to explode the Moon. Well, at least they have some ambition, something this country sorely lacks.

Make no mistake; cutting our nuclear arsenal will only make us look silly in the eyes of our fellow nations, like a schoolboy cowering in the corner of the playground, watching meekly on as the big kids play conkers and throw stones at each other. We won't reduce nuclear tensions one iota by scrapping conkers. Conversely, we'll be at greater risk of invasion from Pakistan, or Iran, or one of those other nutcase countries. No, the real reason Brown wants to get rid of our nuclear deterrent is to save money. 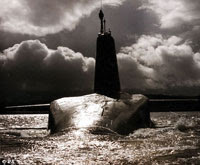 sh. Our entire Trident fleet only cost £20bn, and cutting it by one might only bring savings of a negligible £2-3bn. I think we can all agree this is superb value for money, and Trident has been nothing short of a triumph of efficient spending. Why should it bear the brunt of cuts while our Government squanders tens of billions each year on "pensions" and benefits for illegal immigrants?

The annual defense budget is currently £34bn, so scuttling a single sub would only make a negligible impact. I doubt anyone will notice the savings - it'll only get spent on far less cool projects than atomic submarines, enough staples to supply Whitehall for the next 50 years no doubt, or another new BBC radio station that nobody will listen to.

This newspaper has never been one to call for cuts in public spending, but at times like this it is inevitable that something will have to go. But why can't it be something that nobody wants, like health or education?

If we scrap Trident it will be the first dreadful step towards unilateral disarmament - something nobody in their right mind would wish for. With terrorists hiding in our schools and hospitals, and the Western world fighting the invisible, insidious forces of Islam around every corner, we need nuclear weapons more than ever. The money is neither here nor there.

I fear that in the rush for savings and "economic stability" we are overlooking the most important element of ongoing national prosperity: massive, awesome weapons. With increased investment in nuclear weapons, we could afford to conquer any number of pointless, poorly run nations and start rebuilding our Empire. The profits from a reinvigorated spice or tobacco industry would be more than welcome in these tough economic times, and all it would take is a quick shock, awe and obliterate campaign in India or somewhere like that.

It's time we called for increased public spending, investment in Trident, and a decade of war. It's finally time for some common sense.
Posted by D. Quail (expat) at 09:30