The Bournemouth Echo, mouthpiece of the endangered middle classes of the south west, carries an exclusive front page exposé of a sinister plot by a supermarket to remove common sense from its shelves and replace it with political correctness gone mad.

Hard-working and decent mum Lynn Hutchings fell victim to the Co-op’s draconian liquor laws, which seek to punish honest folk for allowing their helpful children to carry their booze to the counter for them.

The acquiescent, zombie-like Co-op checkout girl demanded Lynn’s 12-year-old son George produce identification before refusing the sale on the grounds that she considered Lynn to be buying the bottle of rosé for George, even though rosé is a girl’s drink.

'Whatever happened to common sense?' cried grief-stricken Lynn, who was forced to dramatically hurl her Co-op loyalty card upon the counter and cross the road to Waitrose, who happened to be all out of political correctness gone mad but did have a special on common sense, pink wine and chocolates.

Trying to make sense of the biggest news story of the year thus far, outraged Echo readers leapt to the defence of Lynn and George.

Sleep deprived commenter 'Yawwwn!' from Bournemouth likened Roségate to other examples of political correctness gone mad, such as the banning of hot cross buns in hospitals and the Union Jack being banned from town halls, both of which are probably because of non-Christians: 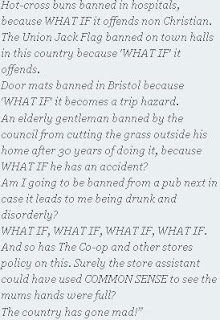 Rhetorically named 'Was Charlie', channelled George Orwell to predict a bleak future in which mothers with babies in prams are refused alcohol on the grounds that their upwardly mobile infants are probably buying the booze for their mums: 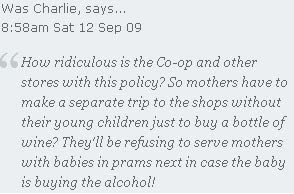 Summing up the whole sorry saga, however, was the impressively literate Kevvo Squarter, so incensed by the ridiculous policies of the Co-op that he felt sporadic punctuation and capital letters would best express the lunacy of the whole thing: 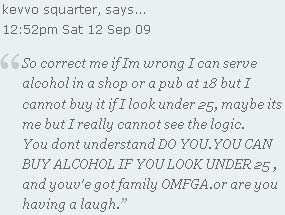