Outrage over political correctness gone made up forces council U-turn 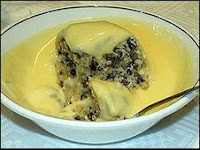 Outraged letter writers, none of whom actually live in Flintshire, inundated the council with poorly written diatribes accusing town hall bureaucrats of eroding British heritage by banning the traditional English dish after reading about it in the Mail.

Councillor Klaus Armstrong-Braun, who was interviewed by a Canadian radio station about the issue, said: 'Spotted Dick is part of our heritage. It's political correctness gone mad.'

Despite the inaccuracy of the original Mail article in suggesting that Spotted Dick had been the victim of censorious council executives, pathological liar Richard Littlejohn decided to highlight the case in his twice-weekly diary of political correctness gone mad and comedic human rights abuses. Making it up, he snorted: 'killjoy canteen chiefs at Flintshire council have banned Spotted Dick', ignoring the fact that in reality it had simply been renamed because kitchen staff were tired of an employee making the same unfunny joke about its name every single day.

With a resigned sigh, the council's chief executive Colin Everett said today that the great desert renaming debacle was due to the 'childish comments of one regular customer', and that 'Flintshire County Council will now observe proper tradition and refer to all dishes by their proper name.'

Reports that the Klaus Armstrong-Braun was the source of the daily 'spotted penis' jokes are being investigated. A spokeshomosexual for Richard Littlejohn said: 'This is a victory for victims of imaginary political correctness gone mad everywhere. Just because something isn't true doesn't mean you can't do something about it. Wahey!'