in blow out sales so they can sit at home all day watching Jeremy Kyle and not go to work, with the effect that motorways are gridlocked meaning that ordinary hard working people can't get to their jobs on time just because benefit claiming single mothers want to grab a bargain, according to bloke 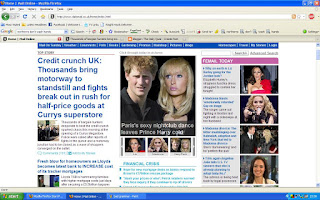 In a hard-hitting report last night, The Mail broke the news that a sale held by a new Currys store resulted in traffic jams in the local area. The news comes as a stark illustration of the credit crunch, showing just how dire the global economy is. Entire countries falling to their metaphorical knees is nothing on this.

According to David Wilkes, who was so shocked by the situation that he lost the ability to write goodly, 'Officers did crowd control to stop people being crushed in the queue'. Furthermore, 'A 75-year-old woman who had been waiting in the mammoth queue since 3am collapsed during the chaos and taken [sic] to hospital by ambulance as a precaution' or something or nothing.

One shopper cried: 'Everyone was pushing. One lady had to leave because she felt sick and I had to help a couple in their seventies who were getting crushed.' Another onlooker told how one young couple became so excited by the prospect of a £20 sat nav they actually began tearing their own skin off, while a local PTA member doused a security guard in home-made napalm before being arrested by MI5, who had been tipped off by the store manager that trouble was a-brewing.