Now Brand and Ross are gone, Get angry at this guy

In a show that was originally broadcast 21 months ago, but which was brazenly repeated on Wednesday at the height of the Wossgate scandal, a so-called 'comedian' made an outrageously 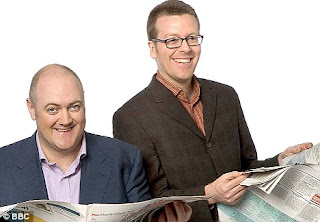 filthy and derogatory comment about our beloved Queen. The comments immediately led to calls for a ban on all 'comedy' programming, and a gag on Queen jokes in any public spaces.

Frankie Boyle, who is Scottish but still gets paid your tax pounds to spew venomous drivel by the allegedly BRITISH Broadcasting Corporation, was asked as part of the 'Mock the Week' show to think of something the Queen would not say in her Christmas speech, a broadcast close to the hearts millions of impressionable young children and sensitive elderly people. His 'disgracefully foul' reply was: 'I have had a few medical issues this year - I'm now so old that my p**** is haunted.'

It is unclear what the p-word is because of the stars, but we're pretty sure it's something utterly obscene.

'Mock the Week' claims to take a satirical view of current affairs. Although we've never actually watched it, it seems like what it really does is encourage contestants to use filthy language and target poor old ladies, as well as taking unwarranted swipes at Britishness, while promoting homosexuality and communism.

The decision to allow the 'joke' to be aired on the show at 10pm, hours after Brand resigned, has led to renewed anger among viewers, according to our own estimates.

One newspaper sent a transcript of the comments to Mediawatch It was a disgracefully foul comment to make about any lady. Just because the Queen is the Queen, it doesn't mean she doesn't have feelings, and she should not be subjected to that kind of comment on a national TV programme. Ordinary, decent people who are struggling to pay their mortgages must wonder why overpaid buffoons are being rewarded for making foul comments about elderly people who have always behaved with the utmost decorum.' Quite.