Maniacal deity hating boffin Richard Dawkins, who admits to being related to monkeys, is turning his rabid stare away from religion and now wants to destroy harmless children's stories for being 'unscientific'. 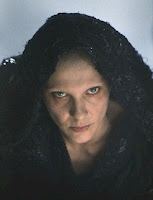 The sworn atheist, who hates Christians and has cloned his own daughter, thinks JK Rowling's magical tales of sweet young wizards are 'pernicious' and 'insideous'. Sources close to the heathen have revealed that he also hates Paddington, Winnie the Pooh, Rupert and other make-believe bears, branding them 'too furry to be trusted'.

Dawkins, whose dogmatic desire to erode traditional belief systems has led one newspaper to list him as one of the 50 people who have 'wrecked Britain', admitted that he hasn't even read the Potter books. Asked in an interview with More4 News why he was so eager to crush childrens' fantasies and replace magic with hateful and unproven scientific ideas like evolution and gravity, he screamed 'there's so much magic in science!' before stamping on a furby and punching a Buzz Lightyear doll.

The unemployed former professor of fluffy soft-option subject 'science and understanding' at Oxford Polytechnic University plans to follow in the footsteps of other has-been celebrities and write a kids book, which he arrogantly suggests will 'appeal to the children to think for themselves'.

Critics have warned that the book will encourage children to question their elders and learn more about things like science, theology and history, topics that no parent should be forced to discuss with minors. Dawkins's previous books have been notable only for being little more than 'near hysterical propaganda', and of 'turning the clock back to a pre-modern age of obscurantism, dogma and secular witch-hunts'.

Richard Dawkins stood accused of 'Google bombing' today after it emerged that searching for a key phrase found in a daringly critical article on the militant atheist yields a libellous and wholly contemptable top 3 result that suggests none other than the virtuous editor of England's favourite newspaper is in fact 'the most dangerous man in Britain'. Dawkins' name is suspiciously absent from the results. We suspect foul play and are calling for a campaign to stop sick atheist zealots manipulating search results.
Posted by D. Quail (expat) at 22:32