An unemployed, benefit-claiming, Afghani asylum-seeker single mother of seven who claims £170,000 of taxpayers money each year is living in luxury accommodation in swanky Acton in West London for free, paid for by the local council, it was revealed yesterday. Minutes after the news broke, hospital admissions of right-wing commenters sky-rocketed as many literally imploded with rage. 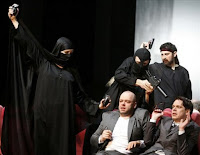 state after his internal organs began overflowing with choleric bile, inducing a quasi-schizophrenic catatonic state. He was observed rocking violently back and forth, foaming at the mouth, unable to speak apart from repeatedly muttering the words 'Couldn't...make it.....up'.

Toorpakai Saiedi, as she is known to her countless children and relatives, is given a massive £400 a month to support her herd of offspring in the opulent London manor, which itself costs almost £15,000 a year. Jawad, one of her many offspring, displayed contempt for the traditional British way of life, screaming at reporters 'If someone paid you the lottery jackpot, would you leave it?', to which most replied sincerely 'Yes we would'. It remains unclear why the Saiedi family did not refuse to move in when they realised how much they would be costing the hard-working British taxpayer. Acton is, afterall, a celebrated hotspot of cheap outdoor accommodation such as park benches and doorways which are inhabited by numerous non-earning but responsible Brits.

It was noted by one news source that the case epitomised everything that is wrong with Britain today. Despite the fact that the placement of the Saiedis in such expensive housing was later revealed to be a mistake, resulting in two council employees being unceremoniously fired, the story is still, without doubt, absolutely typical of the kind of treatment all asylum seekers receive in this country. One commenter rightly pointed out that: 'the person receiving the house should realise how expensive it is for the taxpayer and refuse to move in - they should be homeless instead.'

The Floridan freelancer said, after recovering from his initial rage induced coma, that: 'If ever a single news story summed up the howling insanity of Brown's Britain, this surely has to be it', acutely pointing out how an exceptional and isolated case entirely sums up what some misguided critics claim to be a complex social problem. Understanably, he later admitted that he didn't quite comprehend the situation, whispering: 'It's difficult to decide on what precise level this lunacy is most outrageous' before going on to link the Acton family with terrorists who landed a hijacked aeroplane in Stansted eight years ago. The Afghan embassay declined to comment on whether the Saiedis were indeed behind the hijacking or what they were up to over here and whether or not they were planning to blow something up.
Posted by D. Quail (expat) at 10:53