Boffins admit that anti-matter machine will explode the world 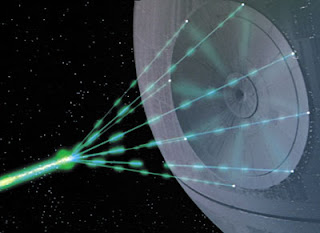 The entire Earth, including Britain, will be destroyed next Wednesday it emerged yesterday. Inhabitants of the planet have been advised to quit work and make a list of things to do in the remaining four days, although the Labour government has yet to delcare a public holiday.

On Wednesday, the so-called 'Large Hadron Collider' will be switched on by shadowy scientists living in a network of underground tunnels beneath Switzerland and France. The giant particle accelerator has so far cost taxpayers an astonishing £4.4 billion, money which could have been put to better use supporting struggling coal miners in England, or on reducing knife crime somehow. The money will literally go up in smoke, as it has been revealed that results from the particle collisons won't even be visible to the naked eye.

Apart from when the giant science machine explodes the world that is. Despite warnings in the Dan Brown novel Angels & Demons, which sees the Large Hadron Collider produce anti-matter used to blow up the Vatican, reckless scientists are determined to switch the accelerator on anyway, dubbed 'Death Star III' by critics. Now, rational sources are claiming that the 'LHC' will bring about the apocalypse within days, by creating 'showers of black holes'. Respected science journalist Fiona Macrae details in a devastating report how the death machine 'will create a black hole that could swallow the planet'. Although her otherwise brilliant and well-researched article does not provide precise details of how this could happen, Michael Hanlon explains for us that 'The fabric of the planet itself would start to disappear, trillions of tonnes of rock, water, air and life sucked into a whirlpool of unimaginable force.'

But the vivid and terrifying description is not enough to persuade the lunatic scientists from turning on 'Death Star III' shortly before lunch-time on the 10th of September, a date that will go down in history as The Last Day in History.

James Gillies, spokesman for the League of Evil's Scientific Megadeath divison (CERN), said facetiously: 'The Large Hadron Collider will not be producing anything that does not happen routinely in nature due to cosmic rays. If they were dangerous we would know about it already.' It is thought that his lies are due to exposure to dangerous quasi atomic hyper rays given off by the experiment, which, it is postulated, have the power to turn a perfectly normal man's mind from good to the purest evil, making the victim want nothing less than the destruction of humanity as we know it. Tez, from Manchester, expressed his concerns, saying: 'How dare these people take a risk with everyones life just for the sake of science, I say no to the generator'
Posted by D. Quail (expat) at 20:02