Eating Crisps Will Give You Cancer 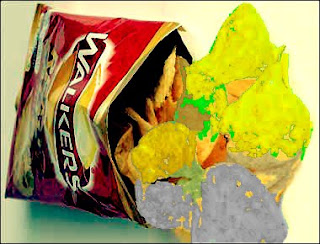 Disturbing evidence has been unearthed that crisps are nothing more than a cancer-delivery agent, designed to give anyone eating them the deadly virus. Scientists have warned consumers to add snacks such as Pringles, Hula Hoops, Ryvita and Tesco Ginger Nut biscuits to the 'Do Not Eat' list of carcinogenic foods, which already contains over 100,000 other dangerous products like jelly, sandwiches, coffee and heroin.

The cancer-causing chemical acrylamide forms when when starch-rich foods are fried, baked, grilled or toasted at high temperatures, and it is thought that New Labour has been deliberately frying as many starchy foods as possible in an attempt to kill of voters who might otherwise support the Conservatives. Evidence suggests that over 90% of Tory voters have eaten crisps in the last 12 months.

Despite the Food Standards Agency's conclusion that acrylamide in crips and other starchy 'death foods' should 'not increase concern about the risk to human health' and that 'people do not need to change their diet or alter the way in which they cook their food', critics have warned that the situation is indeed very scary and that things that you might eat every day might kill you and your family. Ignoring the FSA's dangerously irresponsible advise, concerned and socially responsible news publications have been carrying informative warnings in the hope of enlightening the general public to the horrors lurking in everyday foods, waiting to eat your insides.
Posted by D. Quail (expat) at 00:16