Obama had no chance; McCain wins debate before it happens 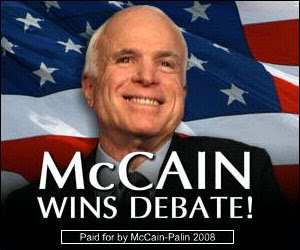 Taking inspiration from The Daily Mail's coverage of a convention that had yet to take place, McCain proved his political prowess by travelling to the future to find out who came out on top, before returning to the past to post advertisements on a leading news publication's website declaring his victory. Commentators pointed out that Obama made no such efforts to find out the future result himself, remaining lazily in the present in the hope of winning the debate using outdated methods such as rhetoric and honesty.

Inside sources told The Quail that McCain had almost certainly used the so-called 'McFly' technique to gather information about important political events before they came to pass, demonstrating an aptitude for cutting-edge technologies that belie any liberal claim that the Republican senator is unable to even use his e-mail. The Obama campaign will no doubt be running scared now that their mighty Republican adversary has proven the futility of opposing them; it is thought that in preparation for the next debate, McCain has already listened to what Obama will say and has started planning his responses accordingly.
Posted by D. Quail (expat) at 14:46