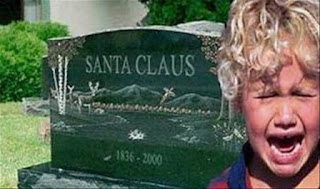 A college in Yorkshire has banned Christmas this year, and is instead planning a huge bonfire of old festive decorations, around which shamans and hideous goat-demons will dance. Rather than giving presents, families will be forced to sacrifice fluffy animals to pagan deities, stockings will be replaced by gimp suits and instead of mince pies, human flesh will be served wrapped in badger stomachs.

The decision to ban Christmas was made by Yorkshire Coast College in collusion with Ofsted, who both believe the traditional Christian holiday is disgusting and offensive to ethnic minorities. Appropriately named Tory MP Robert Goodwill said in a stunningly original and eloquent statement: 'They [the heathens] are petrified that they offend the minority but what they are doing is offending the majority. It's political correctness gone mad.’

The college, which has been described by critics as ‘The New Oliver Cromwell’, claimed that 'We constantly review the ways in which we communicate, to ensure that we do not discriminate, and part of those reviews means that we have stopped referring to the Christmas Break and Easter Break and we now have End of Term Break.' This statement is clearly little more than unintelligible left-wing nonsense.

The ban follows several other cases of Christmas killing over the past several years, which have resulted in few Britons even being aware that the festival still takes place. Gordon Brown was unavailable to comment on allegations that New Labour is planning to completely replace Christmas with Saturnalia and Easter with Ramadan.
Posted by D. Quail (expat) at 14:12