Calais Rapists are Coming For Your Daughters 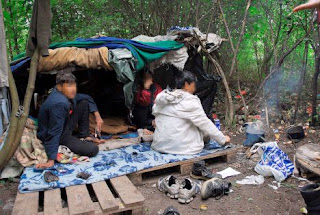 Two men who didn't rape a journalism student in a Calais immigration camp, but who probably wanted to, might already be in the UK looking for new victims.

The 31 year old student had travelled to Calais to interview migrants when she was kidnapped and raped last month. The two men in question were arrested on suspicion of the crime shortly afterwards, but subsequently cleared after DNA evidence proved them innocent. However, just because they have been cleared doesn't mean they haven't ever raped anyone else; indeed, the fact that they are of Afghan and Iranian origin makes it all the more likely.

Reporting on the case, Emily Andrews noted that: 'Although it appears one man raped her, police said others may face charges of aiding him, or failing to help the victim, whose screams are said to have been audible throughout her ordeal', meaning that even though the crime was carried out by a lone individual, it would seem reasonable to lay the blame with the entire population of the camp. Many commentators have recommended that we should in fact blame all foreigners, as evidence has shown that they do things differently to British people and are therefore more likely to rape and murder us.

French state prosecutor Philippe Muller said: 'The logical route for [the rapist] to have taken out of France is to England. We are targeting Britain, Belgium and Holland but with people-smuggling contacts he could be as far away as Italy.' Given the fact that all European immigrants come to Britain, thanks to New Labour's notoriously lax border controls, it's a safe bet that he's in England right now. He could even be spying on you from across the street, waiting for the perfect moment to pounce.

Insiders called for an immediate suspension of all public activities and a 2pm curfew to be enforced for under 35 year olds. It is thought that men are at as much risk as women, because immigrant rapists are unable to distinguish male Britons from female, instead forcing themselves on anyone within sight.
Posted by D. Quail (expat) at 17:49