The Internet is Full of Lies and Piffle 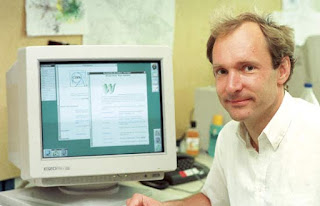 Sir Tim Berners-Lee, the man who invented the internet, has called for a system to expose hideous left-wing online lies by creating a classification system that will allow surfers to separate fact from fiction.

While the world wide internetwork communication system (the 'internet') has become the medium of choice for people to find things out, its 2million websites are all rife with errors and misinformation, most of it put there deliberately by bureacrats in Brussels.

Another newspaper reports that Sir Tim 'was concerned about the way the internet spread misinformation about the unproven links between the MMR vaccine and autism' and that he 'cited emails and websites that promoted the myth that the latest Cern atom smasher - the Large Hadron Collider - could create black holes capable of gobbling up the earth' as evidence of the need for moderation.

To ram the point home, we present below...