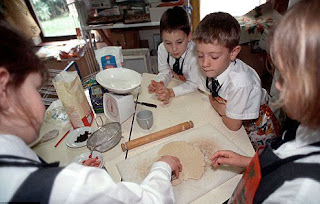 In a hard-hitting report on the situation, Laura Clark reveals that, disturbingly, 'Pupils could even be assessed on their "personal development" as well as the three Rs'. The idea of teachers paying attention to the development and needs of the young students in their care is clearly absurd, and critics have warned that the plans will result in primary school children being seens as 'little adults' with emotions and ambitions just like real people.

The dumbed-down classes would cover such soft and irrelevent topics as healthy eating, ‘self-esteem’, sex and relationships, drugs and philosophy. Meanwhile, there would be little time left for real subjects like history, woodwork and fox hunting.

Tory schools spokesman Nick Gibb rightly lambasted the plans, saying 'This approach was tried in the 1960s and 1970s and failed, and it will fail again. We need primary schools to focus on maths and English and give children an introduction to the history of our country and the geography of the world.'

It goes without saying that these things would be completely and utterly mutually exclusive with lifestyle classes. Sources have warned that if the plans, which appear to be quite concrete at this stage, are introduced, Britain would be left with a generation of children who eat well, have great self-esteem and can recite Nietzsche but who are unable to read, write or maybe even stand up without help from 'lifestyle mentors'.
Posted by D. Quail (expat) at 23:39