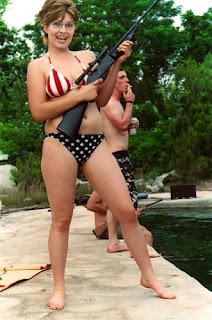 The liberal media was under fire last night over allegations that Vice President Sarah 'pro-gun, pro-life' Palin is the latest victim of a vicious internet smear campaign designed to ruin her credibility as a real lady politician.

The internet, which is run unknown left-wing forces, launched a ferocious attack on the hockey mom, plastering ghastly photographs of Palin in revealing atire on numerous 'websites' which are visible to anyone searching for her name on the worldwide hypertext network. The campaign comes less than two weeks after a similar attack on Hazel Blears by cyber terrorists who 'googlebombed' search engines like AOL and Ask Jeeves to redirect image searches to fake pictures of the cabinet minister made to look like a giant woman. Journalism student Julie Moult was also a recent victim of the technique, after internet demons linked her name to the word 'idiot'. It is still unclear how 'google bombing', or indeed Google, works.

The images depict Palin in a miniskirt and a bikini while holding a rifle and are thought to be cleverly designed to call attention to the fact that she is female and likes guns, both sensitive factors to her position as the third most important Republican in the Former British Colony of West Virginia (or 'USA').

Adding to calls that the internet should be switched off while the offending photographs are removed, Republican Minister of Truth Barbara Brunton shouted: 'There is a dirty tricks campaign being waged against Sarah Palin by the liberal lobby. They have flooded the internet with photographs of when she was a stripper.' It is not known yet how much of a part Barack Obama's propaganda team had to play in the attack, but one inside source told The Quail that 'they might have done it'.

Internet experts recommended that the best course of action is for people to copy the images and post them on their own websites or 'world-wide web blogs' (WWWBs). This would eventually result in search engines treating the images as 'googlebombs' and filtering them from results, limiting the damage caused to Miss Palin's reputation. 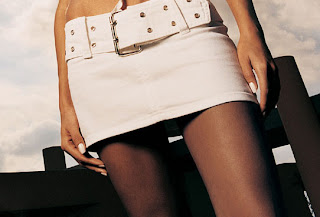