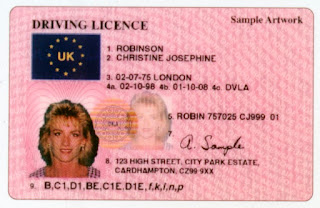 It emerged recently that photocard driving licences only have a 10 year lifespan, after which they self destruct and the owner is charged £1000 for a new one. Nobody ever knew this because information about the secret expiration date is hidden on the back of driving licences; studies suggest that less than 1% of people ever read the reverse side of any credit card sized object, and thus over 99% of Britons will be hit with an unexpected renewal fee when they are forced to get a new licence. Critics have described the situation as another example of 'politically correct stealth tax gone mad' and have warned that children are likely to suffer as an indirect result somehow.

As the evidence shows, Princess Di now goes under the name 'Christine Robinson' and lives in Cardhampton. She was unavailable for comment at time of press, but it is likely that she was not aware of the fine and finds this kind of left-wing stealth tax appalling.
Posted by D. Quail (expat) at 21:52