Micro Soft, the company that manufactures all of the PCs and Macs in the world, today released a new program to make the internet better.

The program, called 'Patch', improves the already brilliant performance of their 'Internet Explorer' tool, which allows youngsters to access a giant web of interconnected computers. Despite concerns about the safety of the so-called 'internet', which has been responsible for kidnappings and can also corrupt your soul, many businesses use it every week to send electronic letters and find funny pictures of cats.

Patch is being sent out to millions of users, as Micro Soft employees 'work around the clock' to fix the Explorer. According to one in-depth technical analysis of the situation, 'The Explorer web browser is used by 70 per cent of all computers. Around two million computer users are believed to have fallen victim already after visiting apparently safe websites.'

Unsurprisingly, the problem originated abroad, as cyber criminals in China exploited a thing in the Explorer to steal information from people. Dressed as ninjas and wielding lightsabers, it is thought the 'hackers', as they are known, hid in electronic bushes on the information super highway waiting for innocent surfboarders to approach. Spotting a potential victim, they would leap from the shadowy undergrowth, knocking the surfers to the ground before deliberately sneezing into the innocent target's face to infect him with a virus, possibly flu. Immobilised with fear and phlegm, the victims yield their valuable booty all too easily, leaving the information pirates free to vanish into the darkness of the interweb.

Micro Soft is hoping to use special 'computer numbers' to repair the flaw that allows the piratehackers to hide behind these cyber bushes. It is hoped that they may defuse the millions of sinister 'Googlebombs' also plaguing the 'web' at the same time, killing two e-birds with one stone. In the meantime, experts have recommended turning off the internet while the fix is prepared.

It is still unclear whether the virus is able to infect televisions, toasters and other electrical equipment, but sources say it would be best just to stay away from modern appliances altogether and wait for the postman to deliver the 'Patch'. If you absolutely must use the 'internet', we recommend an alternative browsing program such as Netscape's Communicator (see below) 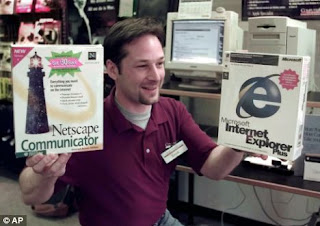