A frontbench MP has been called a 'dizzy airhead' and accused of wasting emergency service's time and money by a well-fed Tory who spends £8,000 a year on taxis.

Lynne Featherstone, who is a woman AND a liberal, dialled 999 when her boiler made some noises fearing that it might explode. Because she is a woman, she didn't realise that, in fact, the boiler just had an airlock and posed no threat to anyone. It is thought that her liberal wooly mindedness also played a part in her disproportionate reaction and absurd desire to protect her children and dog.

Brian Coleman, Tory chairman of London's fire authority, smirked: 'You don't call the fire brigade - you switch your boiler off and call a plumber. She has shown herself to be completely dizzy. Airheads and airlocks are obviously not unrelated. She can't tell the difference between an airlock and a major catastrophe', before being whisked off in a black cab to Glasgow for a quick pint.

Ms Featherstone, a liberal, described her 'ordeal' thusly: 'It was a huge noise, like a pneumatic drill, not a small knocking. There were sparks and we feared there would be an explosion. We weren't going to stay in the house and be killed.'

But in press releases sent out by the honourable Mr Coleman, he accused the left-wing woman of using the fire brigade as her personal heating engineers, asking: 'Would a man have called the fire brigade? I don't know. If there is a fire, call 999. If there is a cat stuck up a tree or you have got an airlock in your boiler, don't call the fire brigade. It costs £250 per hour for a callout and I look forward to receiving a cheque from her.'

Sources close to Mr Coleman's taxi said that he only recommends people calling the fire brigade if their property has already been completely destroyed, and if they have written confirmation that any strange noises, smells or massive increases in temperature do indeed constitute an emergency.

Although a source at London Fire Brigade said Miss Featherstone had done the right thing, one newspaper decided it was still best to imply that the female socialist had wasted the fire brigade's time by making 'an emergency call that [doesn't] realte to an emergency at all' by printing a handy cut-out-and-keep guide to prank or 'nuisance' calls. 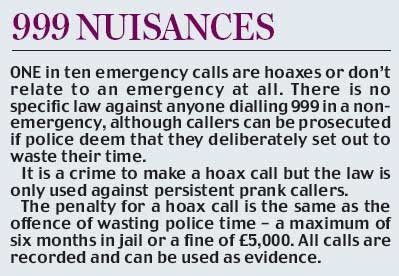 Mr Coleman's personal taxi driver, Bill, suggested that everybody should stop living in houses, which are highly flammable, and instead live in London cabs, which have a very low incidence of spontaneous combustion.

Join Brian Coleman's fan club here. Who knows, he might even add you as a friend. Or poke you.