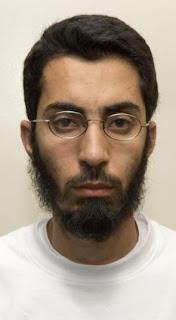 and Glasgow car bombings in June, but will probably blow something up in the future, brazenly claimed yesterday that he is 'only interested in saving lives, not taking them'.

Dr Mohammed Asha, a Cambridge university graduate who worked for the NHS for over four years before not bombing Glasgow and London, was cleared by a jury at Woolwich Crown Court of any involvement with fellow terrorists Bilal Adbulla and Kafeel Ahmed. But Asha, who isn't a white middle-class ordinary Englishman, remains incarcerated in Belmarsh prison 'because the Government says he is a threat to national security.'

One right-wing tabloid, unhappy with the official verdict that Dr Asha was innocent, asked: 'So will Britain ever be able to deport terror case doctor?', while commenters agreed that Britain has far too many doctors already, especially neurologists, and that he should be deported in any case. The paper also carried a handy pocket sized summary of the prosecution's key arguments, despite the fact that they were proved incorrect by a court of law. It is unclear when a summary of 'The Defence Claims' will be published. 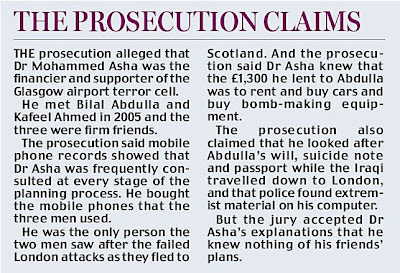 The Mail's coverage led Carol from East Yorkshire to conclude that, even if suspiciously named Mohammed was innocent, he still 'had no right to be here in the first place', presumably because his official residency documents, highly skilled working visa and British education were fake or something.