British criminals could be branded as criminals abroad under government plans

Innocent Brits guilty only of commiting crimes in non-British countries might soon be forced to prove their innocence, under shocking new plans leaked in a secret government dossier hidden from public eyes.

The plan, publically approved in 2005 and due for open publication tomorrow, will see the UK's enormous 'Stalin-eqsue' criminal databases opened up to the beady eyes of EU member states, many of which house countless foreigners. Using DVLA, DNA and fingerprint data, justice departments in places like Germany, which was responsible for two world wars, will be able to snoop through the records of millions of ordinary hard-working taxpayers whose only crime was to commit a crime.

If there is a match found on the British database for, say, a fingerprint on a big stick that had been used to strike an Algerian in France, a suspect could be extradited to face trial abroad, forced to explain why their fingerprints were on the stick or even provide an alibi. At the very least the suspect might be let off, in the event of a mistake being made.

Insiders pointed out how open the system is to errors and false accusations, given the long documented unreliability of fingerprints and DNA. Phil Booth, of the NO2ID privacy campaign, said the Government was allowing its own assault on the principle of 'innocent until proven guilty'. We don't why he said this but he did.

Meanwhile, Shadow Home Secretary Dominic Grieve appeared to imply that Britain harboured more criminals than other EU countries, making it unfair for our great nation to use the same system as more 'crime free' states such as Belgium and Luxembourg: 'There is a real risk that a disproportionate number of innocent British citizens will be sucked into foreign criminal investigations.' Sources agreed that it might look quite bad if the giant database was to throw up more positive matches for law-breakers than other countries, and that Britain might be reduced to a laughing stock and called mean things like 'criminisland' or 'The United Scumdom'.

One right-wing newspaper printed a terrifyingly handy cut-out-and-keep guide to just how easy it could be to be accused of a crime you didn't commit; it would be as easy as travelling to Slovakia, inexplicably leaving your car there, making the police believe you were 'reasonably suspicious', being unable to provide an explanation or alibi, and failing to provide a defensible story in court as to exactly why your car was in Slovakia stuffed full of drugs and gagged hostages who all accuse you of kidnapping. 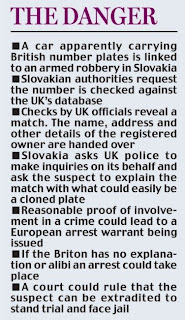 It could happen to anyone. Especially YOU. And your children. Now.

This Slackery slipped through The Quail's brazen net when it was first published. James Slack is in fact in favour of keeping innocent people's DNA on a big scary database, despite what the above steaming pile of Slack would suggest - '"Big Brother' databases [could lead to a] nightmare scenario for a British citizen' falsely convicted by 'a false fingerprint, DNA or number plate match linking them to a rape, murder or other serious crime.'
Posted by D. Quail (expat) at 11:00