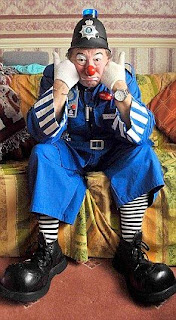 A man was stopped and searched by security guards at Birmingham International Airport yesterday, just because he set off a metal detector.

To his shock, Dave Vaughn found that even dressed as PC Konk the clown, 'he was not above suspicion by airport security chiefs - who strip-searched him just in case'.

'I couldn't believe it when they told me to get undressed so they could search me,' he said afterwards. Sources agreed that stopping to search people who set off alarms at airports was of little use, and that people dressed as clowns should not be subject to the same laws as more mentally stable members of society.

One Florida resident suggested that airport policies to treat everybody equally and stop those who set alarm bells ringing are ridiculous: 'Sometimes, even I'm lost for words. How may suicide bombers disguise themselves as refugees from a circus?' An insider said: 'Yeah, it's not like we can't tell what those Talibans look like - they all wear turbans and have beards. Not clown suits ferchrissakes!'

Calls for Birmingham Airport to allow unrestricted travel for all performers whose work requires them to wear a costume were mounting last night, as support grew from clown rights groups. A spokesman from the pressure group Clown Rights Against Public Discrimination said: 'Oooh this makes me SO mad! Honk honk! Next we'll be told we can't take our comedy mallets or replica firearm water pistols on board! What are we to do? Boing!'
Posted by D. Quail (expat) at 16:38