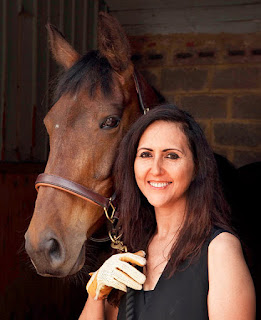 There's nothing more important in this dizzying, confusing modern world of microwave ovens and colour TVs than for a woman to be lovely.

Sometimes, I have to stop amidst all the hustle and bustle, and take a moment to reflect on just how lovely I am. I really am staggeringly lovely, and also fashionable. I pity those poor women who aren't as sweet and innocent - and married - as I am. Women like these. Ew! With that attitude they'll never find a nice, rich, fashionably black man like I have to make them feel all warm and fuzzy and protected.

Anyways, on Friday morning I awoke in my lovely four-poster bed, decked out in beautiful Dorothy Perkins bedsheets and a nice thick John Lewis duvet, to find that - golly! - we'd been snowed in on my quaint little farm in Exmoor! My husband had looked up the weather forecast on that internet thingy on Thursday night (I don't know how to use it) and told me it would be quite chilly, so I had already put rugs on the horses that we own on our considerably expansive property, but I never expected it to snow like this! I mean, the news had been reporting on heavy snow and stuff bringing London to a standstill for over a week but I hadn't really paid attention. Why would I? I'm too busy with make-up and diamonds to listen to the boring old weather!

By 10 o'clock, the snow was too thick to push a wheel barrow through - I often push wheel barrows around our sizeable estate, helping the boys feed the animals and things. They laugh and say I get in the way, but I like to pretend I'm a real farm hand, bringing hay and food and stuff to the stables. It's fun to run around being 'rustic', knowing that really I'm a go-getting city girl with a mobile phone and a bag full of emails; when I'm in high-powered meetings at Northcliffe House I sit there and look at all the other silly single women who only have a dank flat in Brixton or somewhere to go home to, and it makes me smirk to think how lovely I am compared to them.

A few minutes later, tired out by heaving some hay to the horses, I went out with my sheep-dog Coco to check on the cute little Shetland lambs that I'd shut in the hay barn overnight. They're normally allowed to roam free in the fields but I thought they might get buried in the snow, so away they went, inside to the warm and dry. They're so sweet, with their big, misty eyes and curly little tails - they're so cute you just want to eat them up!

Unfortunately, the dogs that we keep in the barn did eat them up overnight as I'd forgotton to feed them for a few days. It was a terrible mess, with bits of fur and hooves all stuck to the floor with blood. Woops! Silly old me. Must remember to keep them seperate in future!

With the lambs taken

care of, I set off to leave food for all the wild creatures who come and visit us. I've seen a rather majestic looking fox coming and going over recent months, roaming the fields like an intrepid farm yard explorer. He's quite an attractive beast, with a wonderfully lustrous coat and strong, lean legs and piercing yellow eyes. I find him almost sexual - if there's a Mrs. Fox, I bet she gets treated to all sorts of erotic displays of animal masculinity, and hours of steamy volfen fun every night. Ooh! If only I could be a fly on the wall.

There's a badger's den in the nearby woods, so I leave some scraps near the edge of our land for them. I've known them for a few years, and have given them names and seen their brood enlarge with the arrival of little badger babies - marvellously cute little things - but they are suffering dreadfully with this horrible cold. Maurice and Belinda (they're the mummy and daddy badgers) were forced to eat some of the youngsters when it got really cold in December. It was rather awful, but such are Mother Nature's mysterious ways. I took a day off from my important job at The Daily Mail to watch with fascination as the two parents snapped their little ones' necks and feasted on their warm flesh. In a way, they were just doing what was best for the family. If only some human mothers would show the same degree of responsibility.

After filling all the bird feeders, I watched in wonder at all the birdies swooping down for some much needed nourishment. It was so lovely, I was filled with a sudden urge to dance around the garden filled with womanly joy, as woodpeckers, linnets, tree creepers, nuthatches, wrens and numerous tits flocked to our designer bird tables. It was like an impromptu avian Cirque du Soleil, an explosion of colour and tweeting! You probably couldn't imagine the spectacle, living in cities or pokey little houses in the suburbs, but let me tell you - it truly was a delight! How lucky you are, my readers, to have someone like me to relate to you the wonderous natural beauty of a panoply of wild birds on a Winter's morning.

Old man Reg stopped by just as I was heading back to the house (I call it a house, but it's more of a manor really). He's a farmer, a deliciously whimsical 'sat of the earth' type character that you people would only have read about in stories, the type of person who makes a lovely antidote to all the silly city-types I see during the day. Local people like him are true heroes; as well as taking feed to animals (sheep, cattle, ponies and goats) on the most remote parts of the moor, he had been knocking on doors of the most remote houses, seeing if everyone was OK as there'd been rumours that some darkies had been spotted in a nearby village, stealing berries from some of the farmers' fields.

'Alright there Liz', he drawled in a slow, low-pitched sort of way that made me go weak at the knees. 'You keeping yourself safe young lady?'

I giggled and told him I was fine, if a little wet.

'Good good. Off to the big city to write your hard-hitting, incisive and progressive column today?', he asked sensually.

'Yes Reg', I grinned, blushing. 'No rest for the wicked!'

Our estate is only a few miles from the A38 in Devon, where more than 200 people were stranded on Thursday night. Despite advice from the nanny-state government, most drivers had not thought to take a survival kit with them: a blanket, torch, wellies, a flask of coffee and a well-charged mobile.

But I can’t talk - silly little me didn't either! I'm just a girl, afterall.

I'd set off for London amidst all the snow and chaos, because my really important, high-flying job stands still for no woman. It wasn't long before I realised, however, that I had virtually no control over my £50,000 car, and after trying to inch my way down a hill (very difficult in an automatic BMW, where the only control you have is to touch your brakes), I was forced to stop at a crazy angle in the middle of the road. Three cars smashed into each other behind me, but luckily I was ok. A crowd of more durable folk - men - clustered round my window.

‘You can't just stop in the middle of the road, you're obstructing both lanes,’ they shouted meanly. ‘We can’t go past you because we might crash into you.’ I felt like crying, and would have started shrieking had I not been so enraptured by one of the scrummy men whose car had been rear-ended when I slammed on the brakes. Luckily, this modern day Adonis posessed manners as wonderful as his tight bottom and the buldge I noticed in his jeans, and helped me push my expensive BMW off the road into a field.

Unfortunately, he was gone as soon as I was off the road, despite my best eye-lash fluttering and theatrical chest heaving. I even undid my blouse, pretending to be flushed from all the drama, but alas, he disappeared back into the blizzard.

So there I sat, shivering in spite of my lovely thick Dior winter coat, by the side of the road (I'd been too silly to put on gloves or a hat because I thought the air con in the BMW would warm me up sufficiantly), until at last a passing 4x4 took pity on my form, slumped tragically, and yet alluringly, by the car, seated on my giant, absurdly expensive Prada tote.

It was a woman driver, I was disappointed to find, but she was kind enough to drive me back to the end of my lane. I was astonished at her man-like ability to drive in the slippery conditions; she even managed to park at our gates without hitting any nearby cars or children. I joked that I should take lessons from her - goodness knows how much cash I've spent settling lawsuits with the neighbours over things I've driven into with our BMW!

So, I was back where I started, and after an exciting day with the animals (especially Mr Fox) and skidding my way around town, I collapsed into the strong arms of my husband. 'Oh! It's been frightful!', I announced dramatically, 'Promise me you'll never let me go out my own again!'

He told me jokingly to grow up, before shutting himself away in the bedroom, but I knew he was just being silly.

I sat down by our real open log fire and thought over the day's events. Lots of men have been talking about how pathetic we Brits have been over the past week or so, but it's alright for them with their big strong muscles and mighty, stoic eyebrows. For us girlies, the cold and the snow makes things really hard, and we don't know what to do.

We have all grown up believing that everything will be OK and that someone, somewhere (the Government, the council, the NHS, our bosses, our husbands, nice young handsome men) will look after us.

We have all (mainly women) become childlike, lulled into a false sense of security by endless signs telling us not to drink and drive, to remember not to give alcohol to children, to eat that all-important five a day. If you disagree, you're either being silly or you're a butch lesbian. Part of being a woman is facing the fact that you just aren't good enough to cope with most things; true wisdom and strength lies in getting men to do things for you.

This freak snowstorm has been a valuable lesson. In the scary Britain of 2009, no one in officialdom can hear you scream. I am not alone in wanting greater state intervention in our lives, as otherwise, how will we know what to do? And I think most of my colleagues at The Daily Mail agree, there needs to be more support from the government, more control, more handouts (but not to those horrible, undeserving working class people), and an increase the public sector watching over us and storing our personal details.

Men might disagree, but what do they know? I for one need someone to hold my hand every step of the way, and so do all women, whether they know it or not.

The one thing I can do on my own, however, is be completely and utterly lovely.
Posted by D. Quail (expat) at 17:02