OUTRAGE erupted today as homosexuals invaded a police station in Limehouse and replaced the Union Jack flag that ordinarily flies proudly above the entrance with a rainbow flag, before painting the entire building pink and then dancing poofily around the Chief Superintendent's helmet. 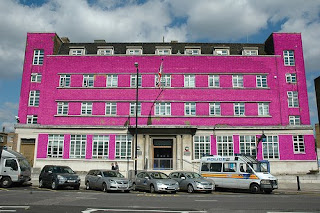 In scenes frighteningly reminiscent of 1956 movie 'Invasion of the Bodysnatchers', bobbies were left mystified as to the identity of the closet homosexuals within their ranks - it is well known that 'gays' stand out a mile in 'real man' jobs such as policing, fire fighting and steel working as they lack the required wrist strength to wield truncheons, hoses and girders with any degree of expertise.

A Scotland Yard spokesman suggested the incident was simply the work of an individual acting alone and completely unconnected to official police policy or any 'politically correct' agenda: 'It would appear someone, albeit with good intentions, decided to fly the rainbow flag over a police building in support of Lesbian Gay Bisexual and Transgender history month.'

But, in a shocking expose, homophobic Daily Mail journalist Stephen Wright implied otherwise by comparing the case to similarly disgraceful behaviour recorded 200 miles away last week, when another 'gay' pride flag was flown at a North Wales police station.

As if that wasn't evidence enough of an insidious nationwide politically correct plot to force ordinary taxpaying Britons to love the 'gays', an unnamed police officer - who may or may not exist - told Wright: 'I couldn't believe my eyes when I saw [the rainbow flag]. The police are playing politics again', while a Tory MP pointed out that hoisting a flag outside a station would prevent officers fighting crime: 'This is tokenism and posturing. People want to see their police force focus on fighting crime, not getting involved in political tokenism and gestures.'