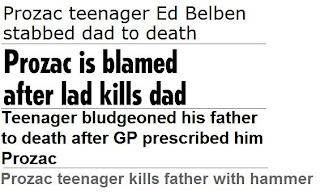 A 15 year old 'lad' was forced into murdering his father and attempting to kill his mother after GPs recklessly prescribed him the contraversial mind-altering drug prozac, a court heard yesterday.

Edward Belben battered his father Gary at least 30 times with a hammer and crowbar before plunging a knife six inches into his brain, then attacked his mother, stabbing her in the face with a pair of scissors before fleeing 'covered in blood, bone and brain'.

Just weeks earlier, Belben had been prescribed prozac by doctors at his local medical practice in Colchester, Essex. He had been diagnosed with major depression in 2007 after experiencing trouble at school, and was known to have self-harmed - Belben described himself as a member of the 'suicide cult' of Emo.

Prozac, which belongs to a class of drug known as SSRIs (Selective Seretonin Reuptake Inhibitors), has 'been linked with a range of side-effects including suicide and violence', said humanities graduate Andrew Levy, reporting on the case. Edward Rees, Belben's defence lawyer said: 'The prescriptions of these SSRIs for adolescents is [sic] guarded with guidelines, most of which were not followed by GPs in this case.'

Speaking at the trial, defence witness Dr Andrew Herxheimer, a clinical pharmacologist, explained how 'in one study, carried out on people without depression, up to one in 20 suffered adverse effects, including "turbulence of emotions and compelling thoughts"'.

Belben had admitted manslaughter on grounds of diminished responsibility, but denied murder as the defence argued that prozac had effectively compelled him to murder his father. Although this claim was categorically dismissed by the court, newspaper reports agreed that the judge and jury had obviously missed point, and that it was indeed the pills - wantonly prescribed by the state funded NHS - that were to blame.

Chelmsford Crown Court also heard some minor, unimportant evidence that Belben had been regularly using a multitude of class-A drugs such as cocaine, crack and amphetamines long before he was prescribed SSRIs, drank heavily, smoked cannabis and had become part of a violent gang. Irrelevantly, he had also described experiencing 'obsessive thoughts', compulsions that made him behave unpredictably and dangerously, and said that he 'didn't feel real'.
Posted by D. Quail (expat) at 23:22