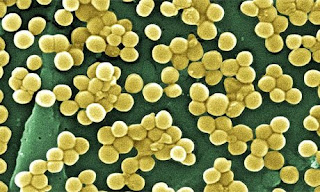 Holiday makers have been advised to hire a caravan and head for Bognor this summer instead of going anywhere pleasant, as scientists warned that leaving Britain increases the chance of catching MRSA by up to 37%.

A study by a team of bikini-clad scientists at the University of Miami found that the killer superbug thrives in warm waters such as those off the coast of Spain, Portugal, Florida and anywhere else south, east or west of England. MRSA already kills around 1,500 people every year in Labour controlled UK hospitals.

Dr Lisa Plano, who led the research, investigated the prevalence of Staphylococcus - of which MRSA is just one of an assortment of distasteful flavours - at a nearby beach by asking volunteers to collect samples of seawater before they were analysed with an MRSAometer. They found that a shocking 37% - nearly half - of the samples contained Staphylococcus and almost all (3%) were MRSA.

Genetic analysis of the isolated organisms found that virtually all of the staph germs were harmless but most of the MRSA samples were live and dangerous. Reports that one of the samples bit a member of Plano's team before escaping into the wild to mate with unsuspecting locals a bit like in that movie Species are being investigated.

Despite estimates that between 20% and 40% of people in Britain unwittingly carry MRSA at any one time, and official advice that the superbug is only a risk to those with deep, open wounds or weakened immune systems, experts warned that it would be best never to travel further south than Devon and advised anyone coming into contact with foreigners to wear protective rubber body suits and avoid all eye contact.
Posted by D. Quail (expat) at 01:07