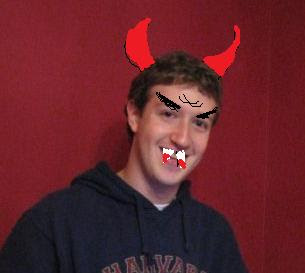 Web based internet hyper-site 'MySpace' has banned 90,000 paedophiles from its pages, leading to fears that the displaced sex offenders will now pose an even greater risk by transferring their accounts to a social networking site that people actually still use.

According to internet security firm Sentinel, which is owned by MySpace, child abusers have already begun flocking to rival world wide net page 'The Facebook' in the hope of luring children as young as three - including yours - into their gnarled, yellowing talons.

John Cardillo, head of Sentinel, revealed that a staggering 0.0056% of The Facebook's 150m users are dangerous child sex offenders: 'We found 8,487 registered sex offenders on Facebook in just a few days by doing a basic search that any user can access' he said.

Cardillo added that it could prove extremely difficult to weed out the vast number of peadophiles that managed to slip past Sentinel's advanced peadophile hunting methods by using advanced evasion tactics like registering 'fake names and details'. Experts warned that up to 100% of Facebook users could in fact be paedophiles masquerading as normal people.

A spokesman for Facebook, which encourages supermarket employees to insult customers, allows teachers to denigrate parents, causes teenagers to shoot each other, has helped gatecrashers ruin peoples' homes, grooms youngsters for a life of crime, bans teddy bears, and has led to the amoral rise of 'generation SEX', said that the site had already removed 4,679 suspected paedophiles' accounts 'as a precaution'.

The remainder of those flagged up by Sentinel consisted of name-only matches for very common names that had a high probablity of not actually being paedophiles at all, meaning that the 8,487 figure is utterly misleading and basically meaningless.

However, sources recommended that the made-up number be taken as representative of just how scary and dangerous Facebook, and indeed, the internet is and that it would be best to remain suspicious of everything invented within the last 40 years.