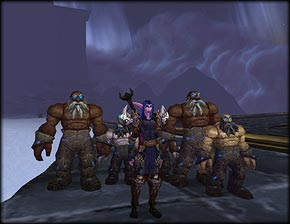 An obscure internet video game has been condemned for causing children as young as 12 to become allergic to reality, after a Swedish teenager suffered an epiliptic-type fit when he realised he wasn't really a mighty Paladin from Stormwind.

Massively Addictive Multiple Player Online Life Replacement Role Playing Internet Computer Games, or MAMPOLRRPICGs for short, are at the centre of a disturbing new crisis that has claimed over 11 million victims worldwide.

Extended sessions in virtual universes such as the 'World of Warcraft' are so gripping that many players forget how substandard real life is, causing them to suffer convulsions when they stop playing and remember that they still live in their parents' basements and don't have girlfriends. Experts fear that an alarming number of Warcraft users are beginning to exhibit classical 'reality allergy' - over-sensitivity to natural light, an inability to digest anything other than fast food and carbonated drinks and an irrational terror of employment.

The 15 year old Swede had been playing 'Warcraft' for over 24 hours before collapsing from a combination of sleep deprivation, malnourishment and over concentration. After leaving hospital, he told reporters: 'At least I have chicken.'

Sven Rollenhagen, who led a study into gaming addiction lambasted 'Warcraft' for being 'more addictive than crack cocaine'. A report from Sweden's Youth Care Foundation in Icecrown Glacier agreed, describing it as 'the most dangerous game on the market'.

Sources close to Warcraft dismissed the study, claiming that the researchers 'were just noobs'.
Posted by D. Quail (expat) at 02:37

Email ThisBlogThis!Share to TwitterShare to FacebookShare to Pinterest
Labels: ian sparks, teh internets, world of warcraft